15 December 2014, Geneva, Switzerland - Crowdcrafting, a Web-based platform for citizen science used also to advance UNOSAT crowdsoourcing research, has been selected for the 2014 Nominet Trust 100, a global initaitive celebrating the ventures that are using digital technology to change the world for the better. The list is curated by a steering group comprising prominent digital and social entrepreneurs. Each year, the list brings together 100 of the world's most inspiring examples of social innovation Nominet Trust is the UK’s leading social technology funder.

Crowdcrafting was developed by the Citizen Cyberscience Centre, a partnership between CERN, UNITAR/UNOSAT, and the University of Geneva. Crowdcrafting was launched in 2011 in collaboration with the Open Knowledge and has rapidly grown to become the world’s most diverse open source software platform for participative research on the Web. The platform lets researchers in science and the humanities connect with volunteers around the globe who are keen to help projects by volunteering their time and thinking. Volunteers can contribute by doing tasks like classifying images or analyzing text. This volunteer-based crowdsourcing enables scientists to process in a short time amounts of data that would have previously taken many man-years. For the volunteers, Crowdcrafting enables genuine participation in scientific research, with learning benefits that accrue from hands-on interaction with real science data.

An example of a Crowdcrafting project helping scientists at CERN is Antimatter, a project where volunteers assist the AegIS experiment at CERN, which is trying to find out how antimatter falls in a gravitational field. The volunteers trace faint tracks of fundamental particles in a thick emulsion, associated with the decay of antimatter particles, which are difficult to detect automatically by computer. Project lead Daniel Lombraña González was awarded a Fellowship from the Shuttleworth Foundation in 2013 to develop Crowdcrafting. As he points out, “many crowdsourcing projects take a lot of money and expertise to manage and run. Crowdcrafting lowers the barrier to entry, so any scientists and researchers with limited resources can launch their own crowdsourced projects on the Web.” 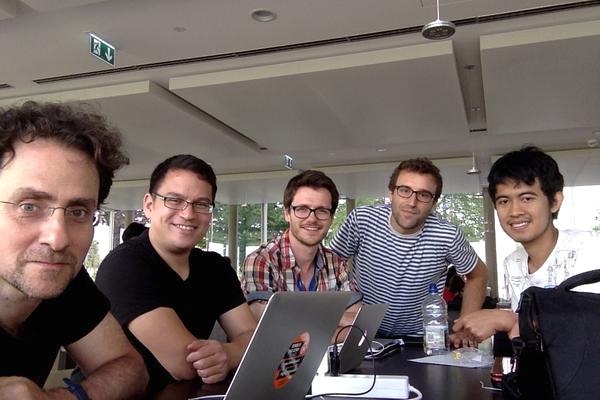 Other examples include ForestWatchers, a project by Brazilian scientists also supported by UNOSAT which lets citizens worldwide help experts monitor deforestation. The project introduced a new paradigm in conservationism, based on the convergence of volunteer computing and high-resolution satellite imagery. ForestWatchers enables anyone (locals, volunteers, NGOs, governments, etc), anywhere in the world, to monitor selected patches of forest across the globe, using a notebook, a tablet or a smart phone connected to the Internet.

Because Crowdcrafting is open source, organizations can set up their own instance of the software framework that powers it, called PyBossa, for dedicated projects. The British Museum, UNOSAT, and the NGO Digital Humanitarian Network are examples of organizations currently using the technology. Francesco Pisano, Director of Research at UNITAR, explains: “Crowdcrafting is more than just a tool for basic science: it combines the power of volunteer participation with the work the UN and many NGOs have to do in generating information and assessments after natural disasters and other humanitarian crises.”