Government of Namibia Thanks UNOSAT for Support During Flood Season

The Government of Namibia expressed his official thanks to UNOSAT for its “positive and proactive support” lent to the country in benefiting from the activation of the International Space Charter during 2009 flood season. In a formal letter addressed to the UNOSAT Manage, the Permanent Secretary of the Ministry of Agriculture, Water and Forestry of Namibia states that “the assistance of UNITAR/UNOSAT was very much valued and this Ministry will endeavour that this good cooperation is continued in future”. 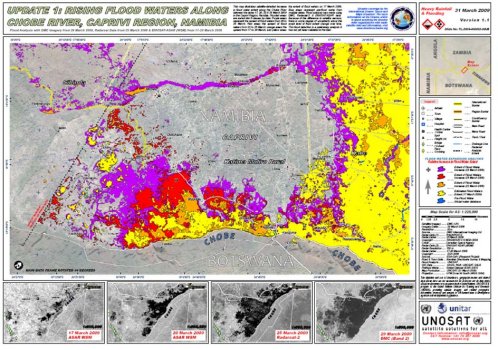 The International Charter Space and Major Disaster aims at providing a unified system of space data acquisition and delivery to those affected by natural or man-made disasters through a system of authorised users and data processing centres, of which UNOSAT is part. In the case of Namibia, UNOSAT was designated as Project Manager and in such role it produced a series of maps and analyses that were then provided to relevant exerts and entities in charge of organising the response to the floods.   Each year, Namibia, as well as a number of countries in Africa and in other regions, is exposed to recurrent risk of flooding induced by heavy rains. UNOSAT works at anticipating the emerging of emergency situations due to hydro-meteorological hazards so to be ready to provide satellite derived geographic information as soon as it is needed by international organisations and national experts. In Namibia alone UNSOAT has produced 29 analyses since 2008.