19 October 2015, Maseru, Lesotho - “The NAP process will help to identify a NAP roadmap for Lesotho, facilitating the coordination of all the existing adaptation projects and initiatives, and the formulation of new concepts which will be further developed into bankable projects” said the Director of Energy at the Ministry of Energy and Meteorology, Mr. Thabang Phure, at the official opening of a two day technical training on National Adaptation Planning supported by the UNDP-UNEP National Adaptation Plan Global Support Programme (NAP-GSP).

In the opening session, the Deputy  Resident Representative of the United Nations Development Programme in Lesotho, Ms Christy Ahenkora, reinforced the importance of national development planning to reduce vulnerability, build capacity and mainstream adaptation into all sector-specific development plans: “Lesotho is already experiencing the negative effects of climate change”, commented Ms Ahenkora, “Over the past 20 years in particular, Lesotho has been exposed to an unprecedented number of droughts and unpredictable weather events, with negative consequences for poor households that rely on agriculture as a primary source of livelihood”. 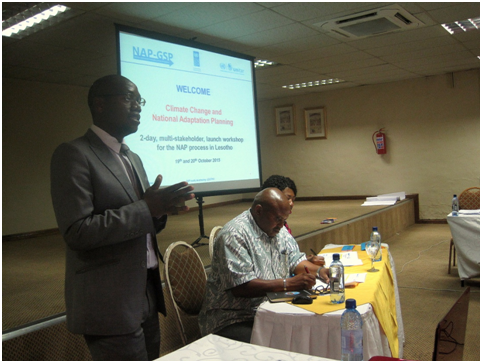 The two-day training workshop in Maseru brought together around 30 national experts from various sectors and departments, including Health, Water, Agriculture, as well as members of the National Climate Change Committee (NCCC), media representatives, academic institutions and civil society. The training was delivered at the request of the Ministry of Energy and Meteorology by a team of facilitators drawn from UNDP and UNITAR, with support from the GEF-funded NAP-GSP.

The objectives of the workshop were:

The design of the programme included numerous opportunities for group working with a minimum in lecture style teaching which generated a great deal of data, questions and discussions. Most of the exercise outputs were captured on displays created by the participants. Trainers used the Harvard Case Method to promote more effective learning and retention of ideas. The training also stimulated engagement across concerned sectors and departments of government, providing opportunities for high level discussion, sharing of knowledge and team building.

At the end of the two-day workshop, a half-day session on Green Climate Fund (GCF) proposal development was delivered at the request of a core group of participants as to facilitate dialogue for joint programming across sectors and identification of themes that can be translated into bankable project proposals.

Photo 1: Opening speech by the Director of Energy at the Ministry of Energy and Meteorology, with representatives of sectoral ministries and the United Nations Development Programme (UNDP) in Lesotho.

Photos 4 and 5: Workshop participants engage in group works to reflect over the general principles of mainstreaming, prioritization of adaptation options, stocktaking and stakeholder mapping in the context of national adaptation planning process.