Strategic discussions between the UN, goverment high-level officials and UNITAR Executive Director during his visit to the UNHQ 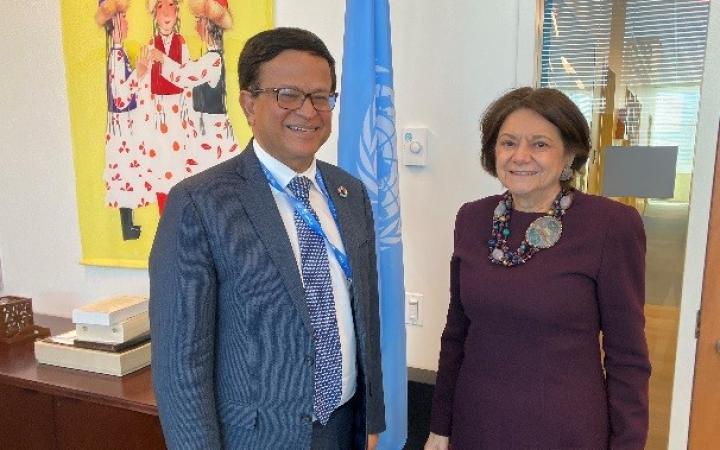 3 March 2020, New York, USA – During the first two days of the working visit to the United Nations Headquarters in New York, the Executive Director of UNITAR, Mr. Nikhil Seth, completed several meetings with United Nations high-level officials and Ambassadors. The visit is taking place from the 2nd to the 6th of March 2020. After a coordination meeting at UNITAR Office in New York, with a brainstorming on the future of training and an introduction by the new office members, Mr. Seth met with the Under Secretary-General for Political and Peacebuilding Affairs Ms. Rosemary DiCarlo. Mr. Seth invited Ms. DiCarlo to the 2020 Special and Personal Representatives and Envoys of the Secretary-General (SRSGs) meeting in June 2020. In addition, they discussed the organization of  a series of briefing sessions in which the Department for Political and Peacebuilding Affairs can be involved and develop a programme that aimed at the diplomatic community in New York. 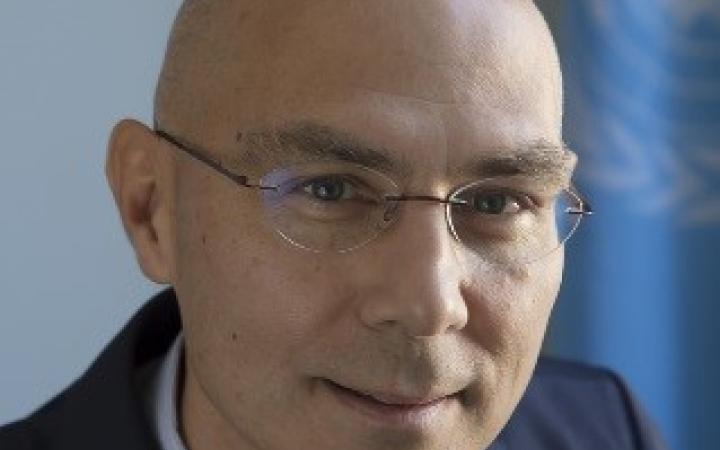 During his first day Mr. Seth also met with the Assistant Secretary-General for Strategic Coordination at the EOSG, Mr. Volker Turk, to ensure coherence in the strategic analysis provided to the Secretary-General by the political, peacekeeping, sustainable development, humanitarian, human rights and rule of law portfolios in the Executive Office. He also chairs the Deputies Committee and serves as the Secretary to the Executives Committee and the Senior Management Group, respectively. Mr. Türk also liaises with the Secretary to the Chief Executives Board to ensure coherence with the system. 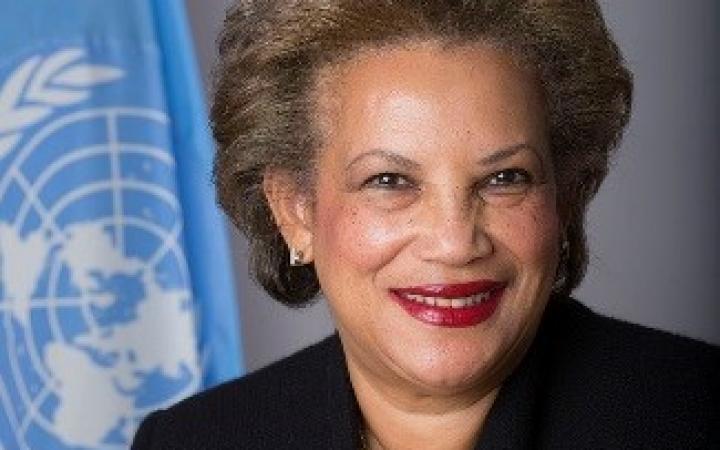 Under-Secretary-General for Management Strategy, Policy and Compliance, Ms. Catherine Pollard, serves the United Nations globally to drive organizational excellence through innovation, accountability, and solutions. Amongst others, this Department oversees and is responsible for intergovernmental and interagency relations, internal administration of justice, communications and outreach on management-related topics and initiatives, programme planning, finance, budget and human resources. 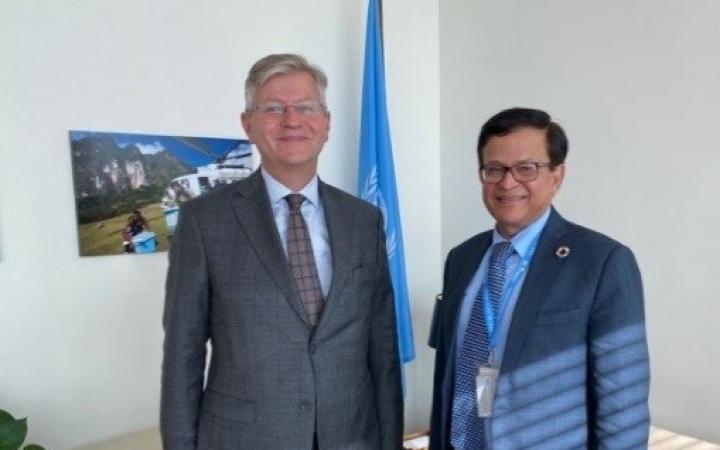 Mr. Seth started his second day of his working visit with a meeting with the USG for Peacekeeping Operations Mr. Jean-Pierre Lacroix, the USG reflected on the importance of the SRSG Seminar taking place in June 2020. The USG also mentioned the need of incorporating health issues in the blue training portfolio of UNITAR, by including CIFAL Race initiatives on road safety to diminish fatalities and accidents during missions and operations. Other items discussed included how to work on delivering peacebuilding, conflict prevention and mediation training and the role of church at a community level engaging their members and promoting peace initiatives in a holistic way. 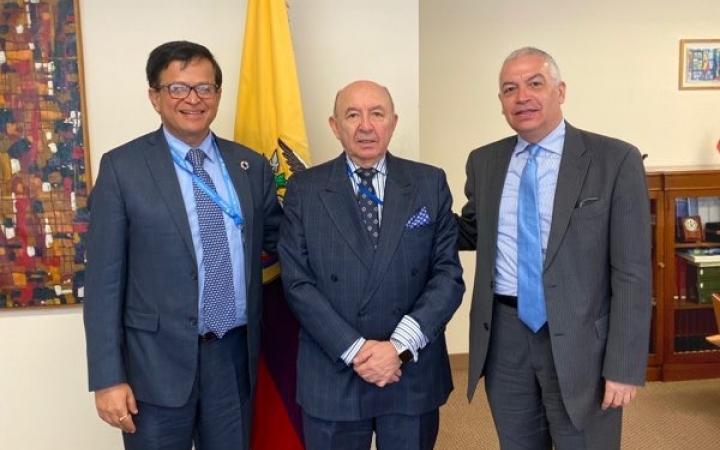 Afterwards the Executive Director met with Chair of the Board of Trustees of UNITAR and the Permanent Representative of Ecuador to the United Nations, Ambassador Luis Gallegos. The topics of the meeting included the next UNITAR Board of Trustee’s session which will take place in Curitiba, Brazil, as well as the opening of a new CIFAL office in Nagasaki, Japan. Ambassador Gallegos remarked the importance of the Convention on the Rights of Persons with Disabilities. His Excellency also pointed out the crucial role of UNDESA  in the Convention, which is intended as a human rights instrument with an explicit, social development dimension. It adopts a broad categorization of persons with disabilities and reaffirms that all persons with all types of disabilities must enjoy all human rights and fundamental freedoms. 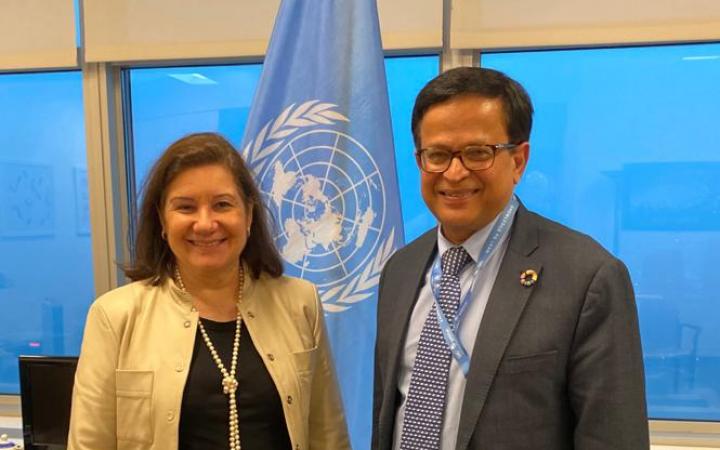 On 4 March, the Executive Director met the Chef de Cabinet of the UN Secretary-General, Mrs. Maria Luiza Ribeiro. One of the topics discussed was an invitation to the Secretary-General and to senior officials for the SRSG seminar that will be held in June 2020. The Chef de Cabinet has expressed her gratitude for this initiative and for the UNITAR's effort on making possible these types of meetings that seek to deeply discuss the ways to address the global problems. It was discussed that one of the topics to be raised during the seminar is about Women, Peace and Security in a face-to-face conversation between the Secretary-General and the USGs. Mr. Seth also conveyed a cordial invitation to the Chief of Cabinet to be present at the next meeting of the UNITAR Board of Trustees that will be held in Curitiba, Brazil in November 2020. 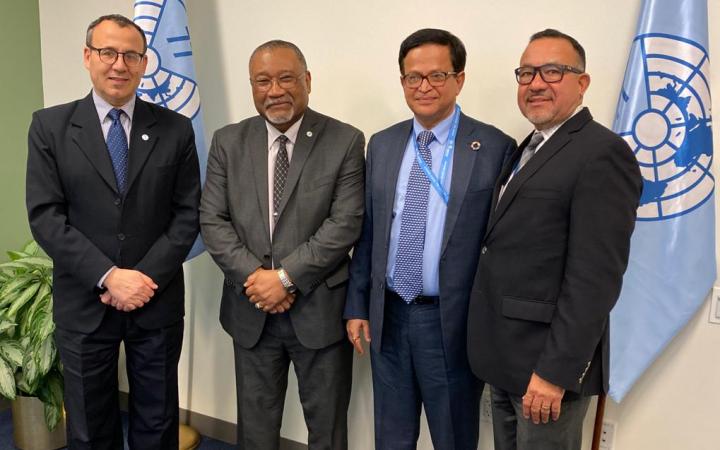 Another productive meeting was with Mr. Rudolph Michael Ten-Pow, Chair of the G77 and Ambassador of Guyana to the United Nations, Mr. Murad Ahmia Executive Secretary of the G77, and Ambassador Niel Pierre of the Guyana team. At that meeting, it was agreed to develop the idea of ​​technical training at the expert level for the G77 member countries as well as at the national level for the diplomats of the Government of Guyana. It was an excellent opportunity in which the Executive Director mentioned the different offers made by UNITAR on training, workshops, and courses tailored to the needs of each State, detailing the four pillars on which the work of UNITAR is based such as Peace, People, Planet and Prosperity.

Since one of the great challenges faced by Guyana is the disaster risk reduction, the importance of conducting training for Guyana delegates on this issue was discussed. An idea approved by both was to introduce and report on all UNITAR projects and work to the Member States at an upcoming G77 group meeting, as well as developing projects potentially between UNITAR and CARICOM. 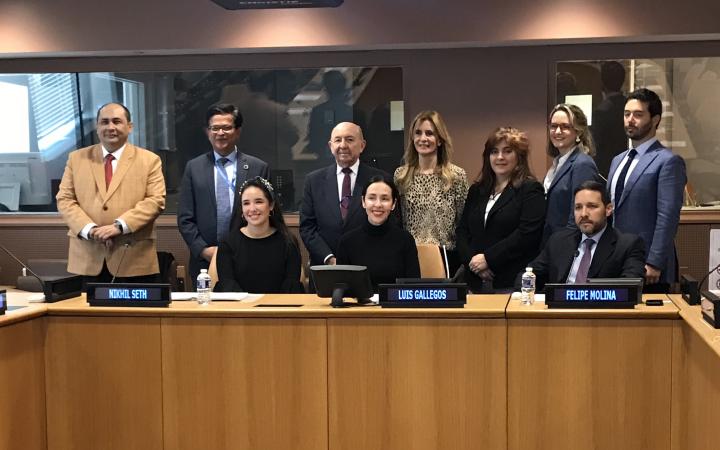 A meeting with the Under Secretary-General Department for General Assembly and Conference Management, Mr. Movses Abelian, also took place, in which Mr. Seth personally expressed his gratitude for the work done by the Department and for the support provided to UNITAR in the allocation of the rooms according to its priorities and needs. The same collaboration is expected to be maintained in the future in all segments including during the HLPF week and in the training organized by UNITAR on QCPR.

At the end of the day, Mr. Seth participated in the dialogue of Business Managers organized together with the Mission of Ecuador, CIFAL and the Regional Center of the private sector. In this meeting, the Executive Director clearly addressed the problem and the global challenge that citizens currently face, and a clear example has been the situation derived from COVID-19. The promotion of peace and security taking only into consideration what has happened during the months of December 2019 to March 2020. "It seems that we live in another planet", he added.

He also noted that concerns business leaders have today must also attract the attention of global leaders. In order to be decisive in our way of acting, it is necessary to pay greater attention to the challenges such as climate change and achieve the SDGs. That is why UNITAR creates strategic alliances with people from civil society, academia, business leaders to reach more and more people with its training offers.

On 5 March 2020,  during the second and final day of the "Hgh-level Roundtable -II Company Presidents Dialogue" organized together with the Mission of Ecuador, CIFAL and the Regional Center of the private sector, the Executive Director has highlighted in his speech about the perspectives that change us in many ways when we look at the latest world events and the weakening of multilateralism. “How could you handle situations of that caliber?” he was questioning to the room. This query thus invites Mr. Seth to reflect on the fact of not losing sight of the Sustainable Development Goals. Not losing strength or desire, was his message, maintaining the ability to achieve long-term achievements. However, he also highlighted positive aspects of current affairs, such as the involvement and inclusion of private companies in government projects. This alliance must be strengthened by adding efforts more rapidly.

“Everything can be achieved”, it was Mr. Seth's message to conclude. For "intentions" to become "actions", UNITAR and its CIFAL centres are in charge to work for and with the community, creating capacities and methodologies for the people. 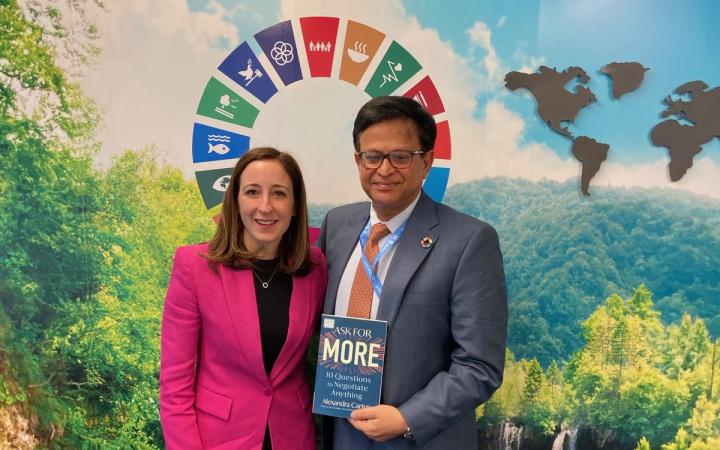 Mr. Seth has also met Mrs. Alexandra Carter, who is Professor of Law and the Director of the Mediation Clinic at Columbia Law School. Their meeting was very productive in terms of following up on all the projects organized with Columbia and defining the guidelines for the following courses that will be held in the coming months. Alexandra Carter, who actively collaborates with UNITAR, has a great experience on training courses and has taught hundreds of diplomats throughout her activities with UNITAR. The courses on Leadership and Self-awareness, Gender Equality and Conflict Resolution, among others, are expected to be reinforced by 2020.

Another productive meeting was with Ambassador Jürg Lauber, Permanent Representative of Switzerland to the United Nations. During this meeting, Mr. Seth was able to personally thank the Swiss Ambassador for the valuable contribution of that country to UNITAR. The Institute is thus strengthened and encouraged to continue working on the training and courses that reach the diplomatic community of New York through UNITAR and its alliances. Switzerland thus supports the work of the Institute and its trajectory in the field of personalized training.

In addition, the Executive Director has met separately with the Bureau for Management Services Deputy Director/UNDP Ms. Priya Gajraj, the Coordinator of the Anti-Corruption Program at the UNITAR offices in Hiroshima, Ms. Martha Cali, and the Permanent Representative of India to the United Nations, Ambassador Syed Akbaruddin, with whom issues of cooperation, reinforcement of training and collaborations with representatives of civil society and NGOs were raised. In general, support the efforts of UNITAR in organizing more training was the main goal of these meetings. These courses should reach young people and integrate all the actors. 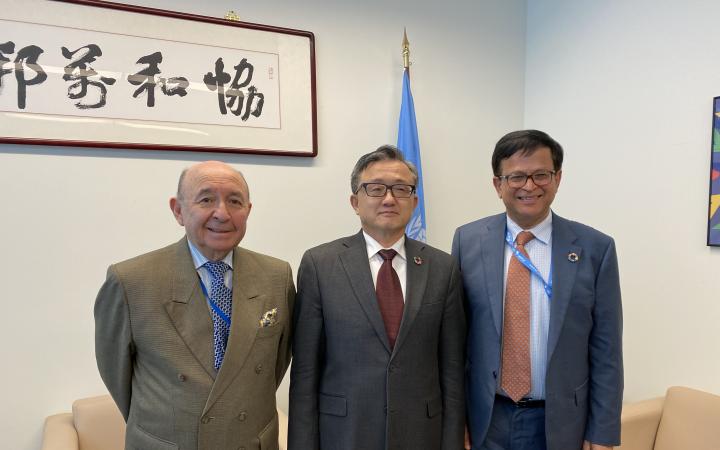 During the last day of meetings, Mr. Seth met with the United Nations Under Secretary-General for Economic and Social Affairs, Mr. Liu Zhenmin. For the meeting, he counted with the kind company of Ambassador Luis Gallegos, Permanent Representative of Ecuador to the UN and Chair of the Board of Trustees of UNITAR.

One of the topics addressed was the situation of COVID-19 and the cancellation of several conferences that were planned for the months of March and April, as well as the crisis generated by this virus worldwide and its social and economic impacts.

The main objective of this meeting was to transmit to the USG DESA the initiative to open a CIFAL (International Training Centre for Authorities and Leaders) in Nagasaki, which would have the support of renowned universities in the Japanese city. This center is designed to be a reference in the region in training courses and will be linked to the activities and projects carried out at CIFAL Malaga, Spain.

The Climate Change Conference was among the topics of discussion, which will be held in Glasgow, Scotland, UK, from 9 to 20 November 2020. It is expected that DESA together with UNITAR, organize several training courses focused on greenhouse gas, governance, sustainable development, energy efficiency, among others. In addition to that, the possibility of creating online courses prior to the UNFCCC COP 26 was discussed, through which it will allow students or interested parties to register worldwide.

The Executive Director and Ambassador Gallegos did not miss the occasion to thank and recognize the USG Mr. Liu for the valuable support and great work done by DESA. The efforts for processes related to disabilities, social inclusion, population, financing for development, among others were highlighted.