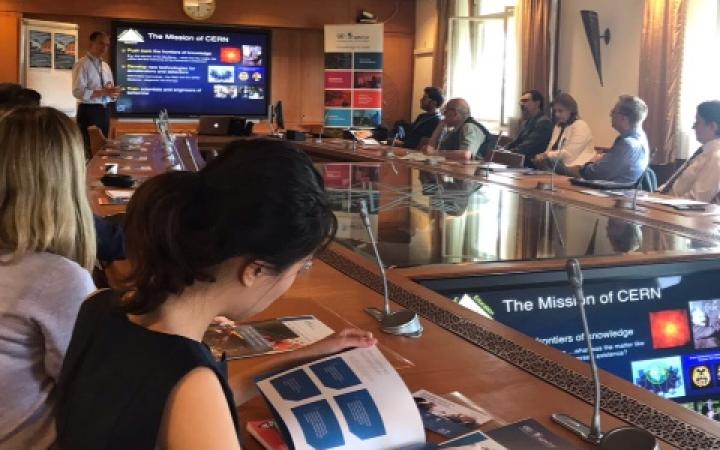 27 July 2017, Geneva, Switzerland - Science is often not adequately accounted for in the main societal discussions and in the related decisions and strategies. Scientists, diplomats and policy makers may profit from a better knowledge of the world of science and its operational models, which in some cases may inspire policies and solutions also in fields other than science.

The public lecture, held on 27 July 2017 at the Palais des Nations in Geneva, is part of a UNITAR-CERN joint initiative addressed to the actors of multilateral diplomacy. The joint initiative aims at raising the awareness on the importance of science, technology, innovation and STEM education for the sustainable development of the society, the intercultural dialogue, and peace.

The objective of the public lecture was to contribute bridging between the apparently distant fields of scientific research, diplomacy and policymaking. The speaker, Dr. Maurizio Bona, Senior Advisor for relations with Parliaments and Science for policy, as well as Senior Advisor on knowledge transfer at CERN, discussed the role of science for society as well as its potentials, based on the experience developed by CERN in its more than sixty years of existence. 30 representatives from international organizations, the diplomatic community, academia and non-governmental organizations attended the lecture, followed by an interactive dialogue.

After a brief presentation of the Organisation, including its governance, objectives, programmes and main achievements, the "CERN model" was described. The multi-faceted international role of CERN as a research laboratory, an inter-governmental organisation as well as a centre for international cooperation was discussed, focussing on the role of science for the social and economic development of the society.

The presentation highlighted the strategy developed by CERN in the recent years to become an active contributor to the multilateral dialogue, on themes related to science, technology and STEM education. The results achieved so far were presented, together with the long-term objectives.

As an example of CERN's participation to major multilateral processes, the input given by the Organisation to the definition and implementation of the UN 2030 Agenda for sustainable development was discussed. Finally, a few examples of past and present CERN’s contribution to peace and to building bridges between different cultures, such as the SESAME project in the Middle East, were presented, with the aim to stress not only the contribution science gives to development and peace, but also the positive synergies that may be developed thanks to a virtuous interaction between the world of science and that of diplomacy.

This public lecture set the initial step of a training initiative on science for diplomacy that UNITAR and CERN are planning to develop for the multilateral diplomatic community.