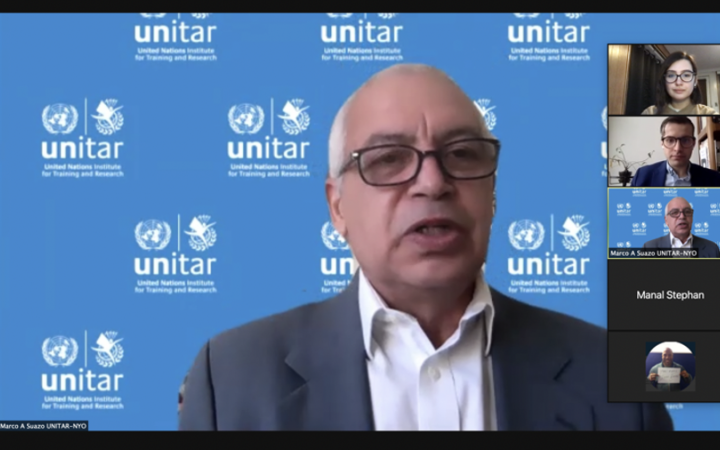 16 December 2020, New York, USA (Virtual) – The United Nations Institute for Training and Research successfully concluded the three-day virtual seminar with its event partners, the Permanent Mission of the State of Qatar to the United Nations and Generation Amazing. Generation Amazing is an organization geared toward youth that uses football to encourage sustainable development, specifically through the principles of gender equality, inclusivity, teamwork and leadership, ahead of the 2022 FIFA World Cup in Doha. This seminar was designed for Generation Amazing’s 15 Youth Advocates, who are a group of young Qataris and non-Qatari residents living and studying in Doha. 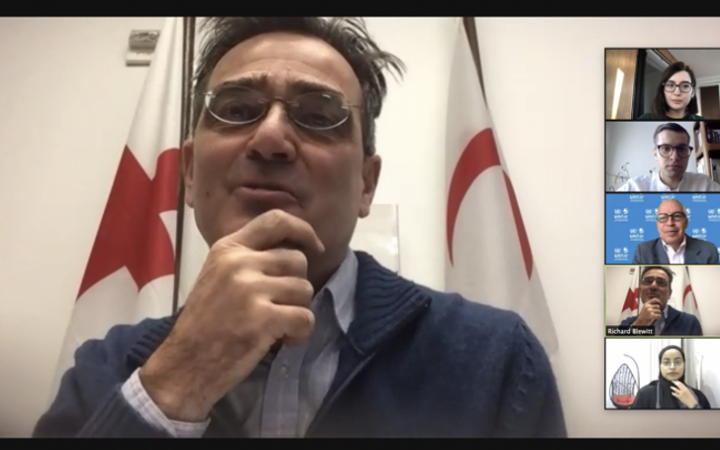 Day two of the seminar focused specifically on the relationship between sports and the SDGs. Mr. Marco Suazo, UNITAR NYO Head of Office, opened the session by thanking the Youth Advocates and introducing the session’s first speaker, Richard Blewitt. Mr. Blewitt, Representative of the International Federation of Red Cross and Red Crescent Societies (IFRC) began by explaining the goal of the IFRC to reduce the impact of disaster in peoples’ lives. He further explained where sports fit into IFRC programmes, specifically mentioning its partnership with the Special Olympics. Mr. Blewitt concluded that sports are only one of many ways young people are affecting change in their community and then the floor opened for questions from the Youth Advocates. 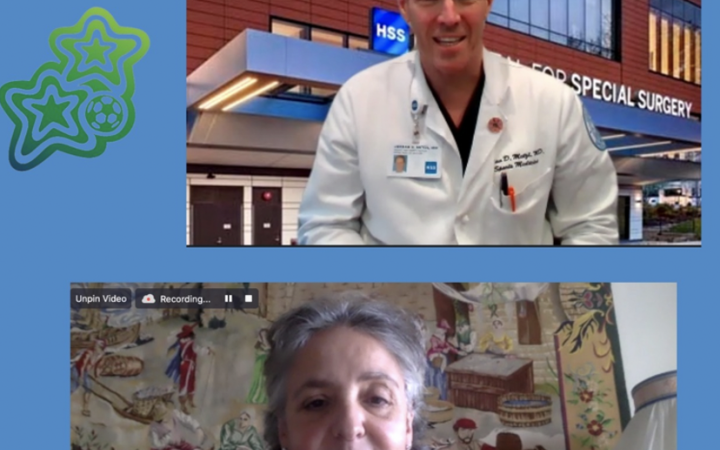 The next speaker was introduced by H.E. Ms. Isabelle Picco, Permanent Representative of the Principality of Monaco to the UN. Dr. Jordan Metzl is a sports medicine physician, and he provided a talk on the role of sports in health with an eye toward the SDGs. He mentioned the importance of sports as a way to bring community together and further how sports enable individuals to be contributing members of society. Dr. Metzl acknowledged the power that sports have specifically in reference to SDGs 3 (health), 4 (education), 5 (gender equality), 10 (reduced inequality) and 11 (sustainable cities).

Dr. Metzl then brought on three of his patients, all elite-level athletes, to discuss the role that sports played in their own lives. Ms. Caia Carlesimo, an elite-level high school soccer player, stressed that values of community, comradery and commitment are all benefits she’s experienced through her dedicated soccer practice. Ms. Sabrina Vega, former USA National Team gymnast, mentioned her perseverance and goal-oriented mindset and credits gymnastics for that. Ms. Lia Neal, two-time Olympic medalist in swimming, echoed Caia and Sabrina’s sentiments and additionally spoke of the opportunity to travel the world and meet people from new cultures as having benefited her today. The Youth Advocates were able to ask the athletes questions, such as how they managed their studies and their sports. 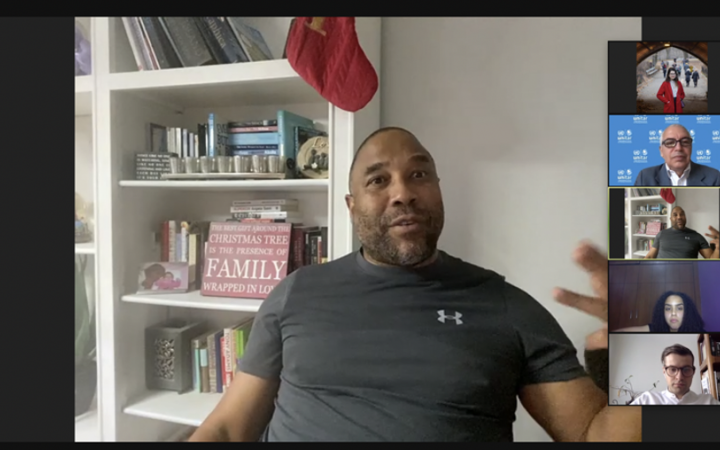 The next speaker was Mr. John Barnes, football player and legend. Mr. Barnes highlighted the resilience that exists in athletes and the benefits this provides to virtually all areas of life. He further spoke about the communities in which football players come from and how sports give opportunities for not only individual fulfillment, but community fulfillment. Mr. Barnes also acknowledged the platform that athletes are given to influence perceptions and policy. The Youth Advocates were then able to ask questions, as well as share their own reflections on how sports have impacted them. Mr. Marco Suazo closed the second day of the seminar by thanking the speakers and Youth Advocates. 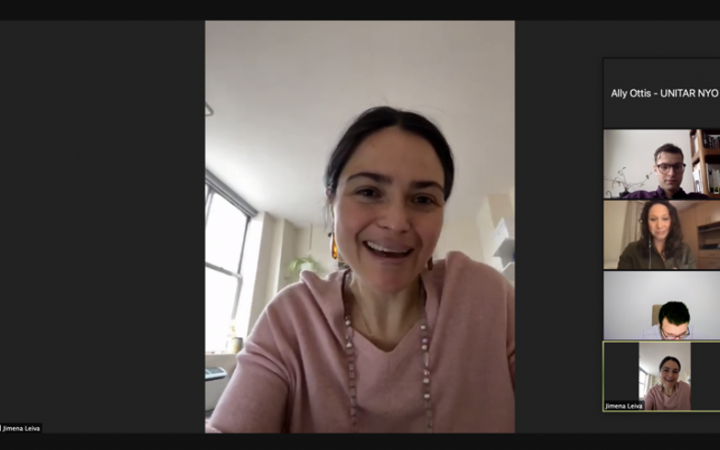 On the third and final day of the seminar, Mr. Suazo introduced the day’s activity of a negotiations simulation. Led by Ms. Jimena Leiva-Roesch, Fellow at the International Peace Institute, and Dr. Rebecca Webber Gaudiosi, former US Diplomat to the UN, the Youth Advocates went through a bilateral negotiations simulation to get a firsthand look at how UN processes occur. Prior to the simulation, Dr. Gaudiosi had the Youth Advocates all introduce themselves, along with two words they believe describe good qualities of negotiators. 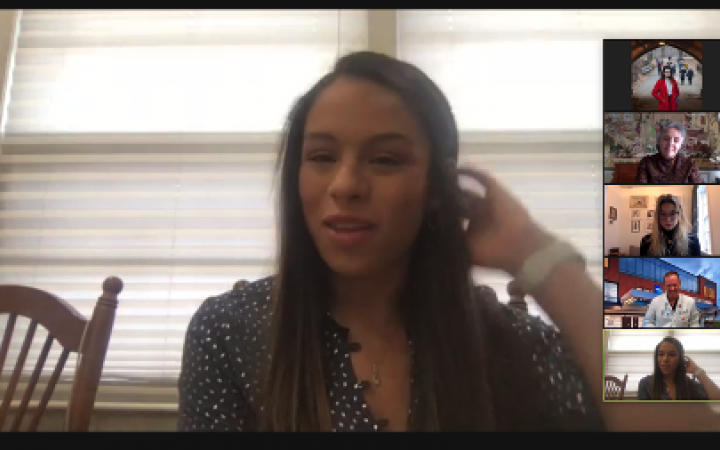 After, Dr. Gaudiosi overviewed what a UN negotiator is and further described the negotiation process. She referred to negotiations as “problem solving with friends”, and explained that win-win scenarios are always the preferred outcome. Ms. Leiva-Roesch jumped in to describe the experience of being a negotiator and likened it to being an athlete, tying in the previous day’s topic of sports and SDGs. She explained that you have to work with a team, stamina is required, and you feel proud to represent your country, which is not unlike the experience of athlete’s. This is another way that sports serve the SDGs.

The session closed with remarks by Mr. Marco Suazo, recapping the prior days of the seminar and expressing his confidence that the Youth Advocates will make great future leaders. This concluded the final day of “Strengthening Youth Engagement with SDGs and the 2030 Agenda for Qatar’s Generation Amazing”.