10 September 2019, New York, USA – The United Nations Institute for Teaching and Research, in partnership with the Permanent Mission to Singapore to the United Nations, began the Briefing for Delegates on the 74th Session of the United Nations General Assembly in Conference Room 12 of the UN Headquarters Secretariat. 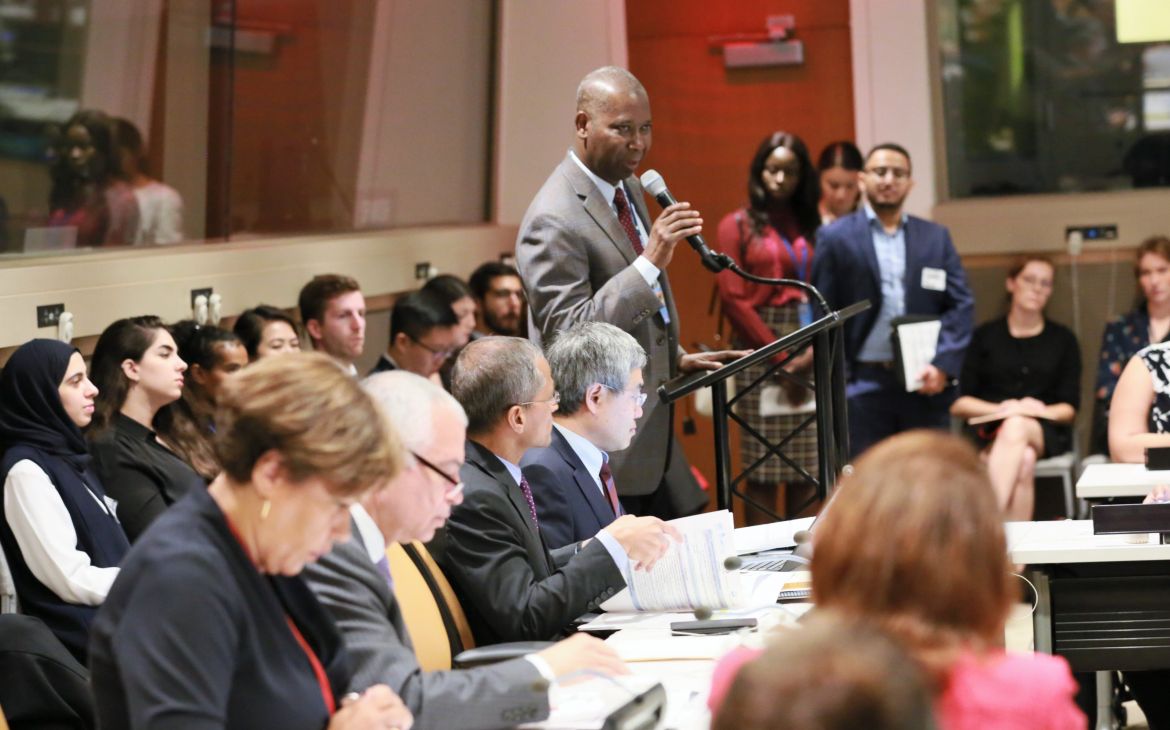 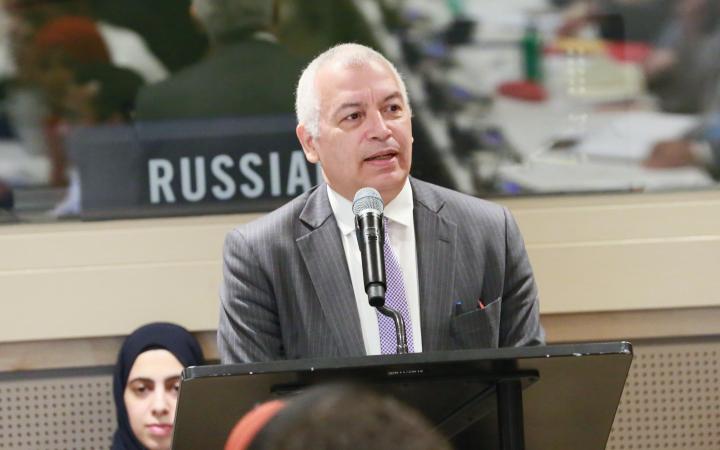 The first session of briefings commenced with opening remarks by Mr. Marco Suazo, Head of Office for UNITAR New York and H.E. Mr. Burhan Gafoor, the Permanent Representative of Singapore to the UN. In his speech, H.E. Mr. Gafoor thanked UNITAR for facilitating the training for delegates and provided some background information on this learning partnership with UNITAR. He explained that although this learning opportunity has gained a wider diplomatic audience as a result of the enthusiastic interest from member States, the idea was initially focused on smaller states because they often lacked the resources to train themselves on the UN and its functions. Expressing his joy at the overall outcome of H.E. Mr. Gafoor reiterated that the basis for the UN was universal understanding of one another and the inclusiveness of all peoples. Additionally, he stressed on the overall wealth of experience and professionalism within the UN Secretariat, thus, encouraged the new delegates to ask questions and seek guidance when needed. 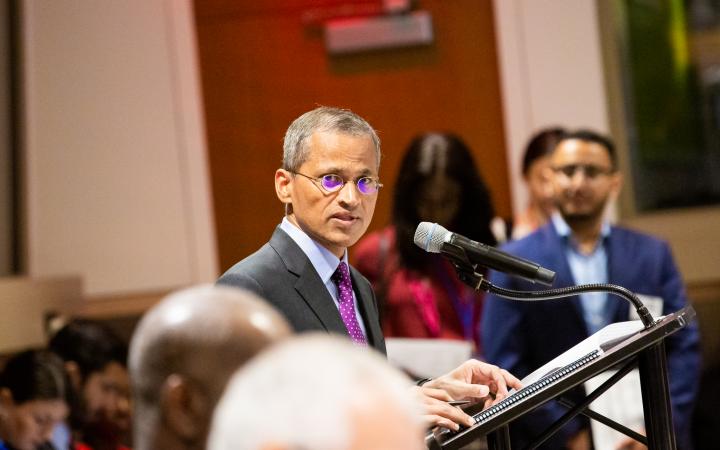 Following the welcoming statements, H.E. Mr. Tijjani Muhammad-Bande, President Elect of the 74thSession of the General Assembly, stressed to the audience that all persons and nations within the UN are of equal importance because member-states need support from one another to reach a consensus or achieve beneficial goals. He reassured delegates that their work was valuable to the international community. In conclusion, H.E. Tijjani-Bande thanked UNITAR and the Permanent Mission of Singapore to the UN for their role in setting up the briefing and expressed his anticipation to witness the work of the new delegates within UN. 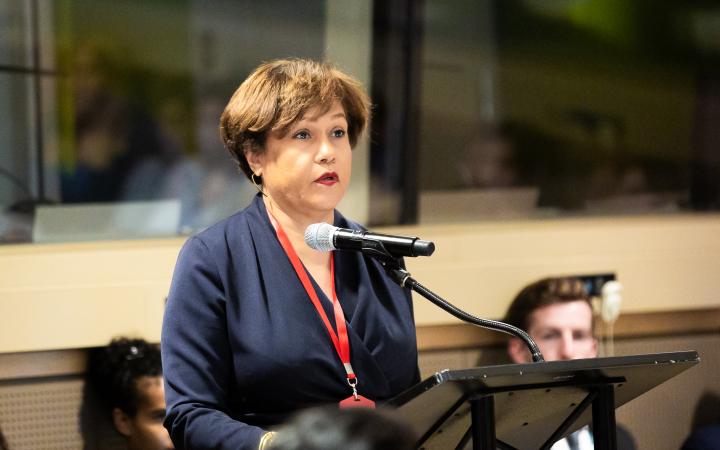 The next speaker, Ms. Ruth De Miranda, Director of General Assembly and ECOSOC Affairs Division (GAEAD), provided an overview of what the GAEAD does, including technical and secretariat support for the committees of the General Assembly. She explained how each committee of the GA has a presiding officer from GAEAD who aids in interpretation and ensuring that all roles are filled. The GAEAD team compile the agenda for meetings; form the work program for a session; arrange the meetings of the bureau of body; manage the overall operation of the session; manage the notes of the heads of the committees and keep lists of speakers who will present at various meetings

Launching into the training, Mr. Kenji Nakano gave an overview of the 74thSession of the GA, providing pertinent information on the session schedules for an entire year, the provisional calendar of events. He also shared reasons for the election of the President of the General Assembly three months prior to the start of the session, citing special historical circumstances that have impacted electing presidents such as the tragic events of September 11, 2001. Mr. Kenji then went over the provisional calendar for the session, exploring the events of the first two weeks including the induction of the President of the GA, the work of the General Committee, and the general debate. The main committees begin to meet in the third week of the session, following the closing remarks regarding the general debate. He noted other dates including October 8thwhen the report by Secretary General António Guterreson the work of the organization is presented, October 31stthe presentation of the International Court of Justice report, and November 13ththe ECOSOC report presentation. He concluded by going over the process of passing a resolution, going from a committee and through to the GA. The final speaker before the lunch break was Ms. Tomoko Iwata, Secretary of the Credentials Committee and Legal Officer at the Secretariat, United Nations. She spoke to the delegates about the rules and procedures of the General Assembly. She provided an overview of her position and what her committee does within the UN. She then went into the position and powers of the President of the General Assembly, i.e. the inherent powers that do not need approval from the GA and the powers which are granted by the GA on a case by case basis. Ms. Iwata also explained the conduct of procedure, procedural motions, and the closure of debate, including the process of adjourning or suspending meetings. 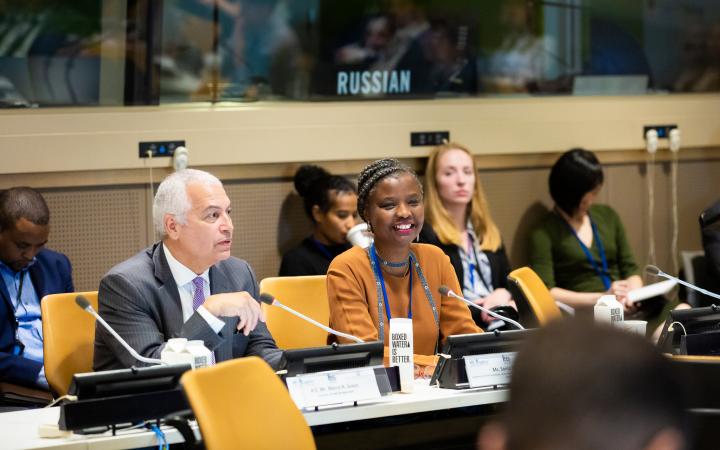 After the lunch break the briefing resumed with Ms. Deidre Durrance and Ms. Tong-Maywald Xin who covered Conference services, Meeting Management and Documentation with the help of Mr. Rodrigo Larranga Romero, Ms. Bell Chi Yuan Yeh and Mr. Rukshan Perera. Ms. Durrance discussed the process by which documents are processed and published simultaneously in all six official UN languages. Ms. Ton-Maywald Xin covered Management, which is responsible for organizing and planning meetings.  She explained the difference between planning a journal and programming a calendar; a “journal” being short-term and a “calendar” being for the entire session. She concluded by commending the prompt start of the FOSS briefing. Mr. Larranga Romero explored all the uses and functions of the eMEETS platform used for reserving rooms and planning. Ms. Chi Yuan Yeh went through the process of booking rooms, including Media Services requests, Catering and Name Plates. Mr. Perera ended the section by exploring the UN Journal. He explained the Journal has been published in all official UN languages since 2018; is conveniently available online and provides real-time information. Ms. Sonia Elliot, Secretary of the First Committee, Chief of the Disarmament and Peace Affairs Branch, DGACM, spoke next on the work of the First Committee of the General Assembly. She explained that the First and Fourth Committees share resources and therefore alternate meeting times between the morning and afternoon. The work of the First Committee is divided into three phases: General Debate, Thematic Discussion, and Action. The documentation that comes out of the First Committee is also divided into three categories: Pre-session, which includes the annotated agenda and programme of work; In-session which has draft resolutions and decisions and Post-session which lists of proposals contained in the reports of the first committee for consideration by the GA. She finished by explaining that only non-sponsorship nations can explain their votes when voting on draft resolutions. 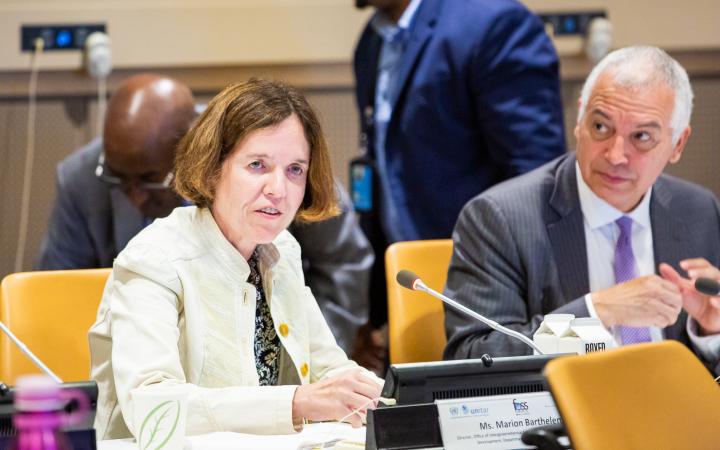 The next subject explored the relationship between the Economic and Social Council and the General Assembly and was covered by Ms. Marion Barthelemy, Director, Office of Intergovernmental Support and Coordination for Sustainable Development, Department of Economic and Social Affairs, and Emer Herity, Chief of ECOSOC Affairs Branch, Secretary of ECOSOC and the Second Committee, department for the GA and Conference Management, UN Branch. Ms. Barthelemy began the discussion on the subject by stating that the Second Committee which focuses on finance and development, is the committee that works most closely with ECOSOC. The Second Committee is divided into six blocs: the first bloc is the macroeconomic pillar of the committee, the second bloc focuses on sustainable development, the third bloc on poverty eradication, the fourth bloc specializes in countries in special situations, the fifth bloc reports on globalization, and the sixth bloc focuses on UN development. ECOSOC works under the GA and supports the charter on international development, linking it to the Second Committee. While the two are linked, the two committees try to prevent excessive overlap in order to maintain efficiency. Ms. Herity delved into the technical and procedural aspects of the Second Committee. She went over important dates for the Second Committee including the general debate, the meeting with ECOSOC and the scheduled date of conclusion. She then explored the documentation produced “Pre, During, and Post-session” by the Second Committee. The pre-session documents include the GA annotated agenda, the programme of work, and the status of documentation. In Session, the Committee produces draft resolutions and decisions. And finally, post-session the product is a checklist of reports of the committee.

Closing out the day’s session by talking about the work of the Third Committee were H.E. Mr. Christian Braun, Incoming Chair of the Third Committee and Permanent Representative of Luxembourg to the UN, and Mr. Ziad Mahmassani, the Secretary of the Third Committee. H.E. Mr. Braun began with a brief overview of the committee as well as some background information, including a note that most items discussed by the committee are related to human rights. He encouraged the new delegates to participate and speak but stressed the importance of keeping their comments brief in order to make sure the committee keeps to its time limit. He was followed by Mr. Mahmassani who spoke about the four areas of work within the Third Committee: The Programme of Work; Documentation; Bureau; and Tools. The programme of work is circulated through the eDeleGATE portal and the items on it are adopted by the GA plenary debate on September 20th. Documentation is broken up into pre-session, in-session, and post-session. Pre-session documents include the organization of work and the status of documentation, in-session documents include draft resolutions and decisions, and post-session documents are reports regarding decisions made and actions taken. The bureau which is made up of a Chair, Vice Chairs, and Rapporteur, organizes the work of the committee and divides responsibilities for drafting and reviewing resolutions. Finally, Mr. Mahmassani closed out the day by mentioning the tools of the committee website, the eDeleGATE portal, and the web-app.

Mr. Marco Suazo then concluded the first briefing for delegates of the 74thsession of the United Nations General Assembly by thanking all the speakers and the delegates for coming.