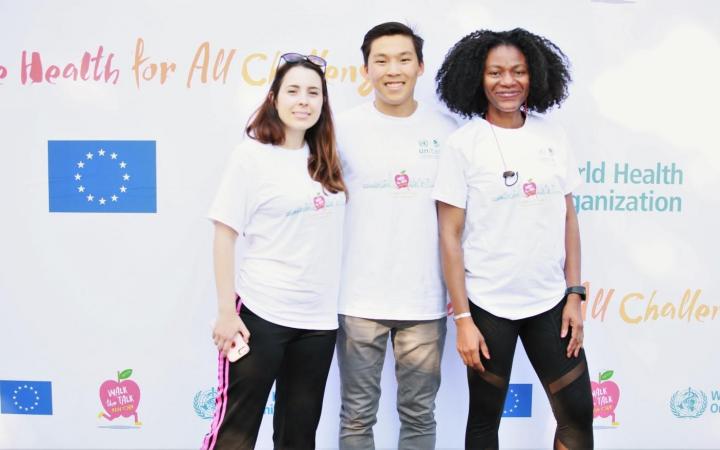 22 September 2019, New York, USA – The United Nations Institute for Training and Research (UNITAR) New York Office participated in the World Health Organization (WHO) event, ‘Walk the Talk – The Health for All Challenge’ at Central Park, New York City ahead of the 74th session of the United Nations General Assembly. It brought together thousands of New Yorkers and visitors from around the world who took part in several events including the highlight activity, a 4-mile walk around Central Park.

Organized in collaboration with the United Nations, the Mayor’s Office for International Affairs and the Office of the First Lady of New York, this event focused on promoting healthy lifestyles and highlights the need for access to health for all people around the world. To formally commence the event, speeches were given by H.E. Mr. Tijjani Muhammad-Bande, President of the 74th Session of the General Assembly; New York City First Lady, Chirlane McCray; President of Palau, H.E. Thomas Remengesau Jr.; European Commission Health Commissioner, Vytenis Andriukaitis; WHO Goodwill Ambassador for Mental Health, Cynthia Louise Germanotta; Dr. Gro Harlem Brundtland, former WHO Director-General; Dr Tedros Adhanom Ghebreyesus, Director-General of WHO and other event partners.

H.E. Mr. Tijjani Muhammad-Bande praised leaders in New York and within WHO for energizing individuals to intentionally take steps towards better and more universal health coverage. He expressed positive belief about effective outcomes in the future considering the high-Level events scheduled for the 74th UNGA this week. The 4-mile walk which looped westward and southward from 102nd Street of Manhattan and then back was symbolic in its inclusiveness of people of all ages and abilities. This event not only serves to urge healthier lifestyles and consciousness to goals of the Sustainable Development Agenda but is a reminder of the commitment by all countries to achieve universal health coverage by 2030.