UNOSAT rapid mapping was activated this March over Uganda in the aftermath of deadly landslides provoked by severe flooding in the region of Bududa. 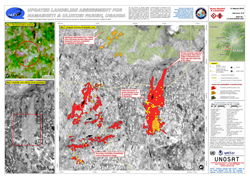 According to OCHA, 94 bodies have been retrieved while over 300 people are missing following the landslides as of 16 March 2010. The disaster occurred on the evening of 1 March 2010, burying the three villages of Nametsi, Kubehwo and Namangasa in the Bukalasi sub-county. 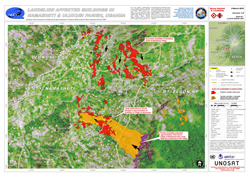 For this event, UNOSAT requested the activation of the « International Charter Space and Major Disasters ». This arrangement between several national space agencies and ESA provides free satellite data for the realisation of geospatial products to be used in humanitarian and emergency response operations following natural and technological disasters.

UNOSAT has benefited from this mechanism since 2003 and created hundreds of maps based on Charter data for the benefit of a large number of humanitarian and development agencies of the UN involved in responding to large disasters. In recognition of the work of UNOSAT, the Board of the International Space Charter appointed UNOSAT “Charter User Intermediary” in 2009.

The Uganda maps have been accessible since 11 March at http://unosat.web.cern.ch/unosat/asp/prod_free.asp?id=43