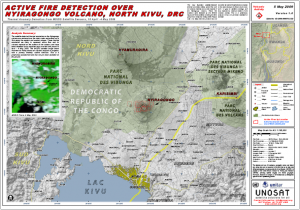 The US National Aeronautics and Space Administration (NASA) reported about the work of UNOSAT on volcanoes in its recent website feature “image of the day”, which referred to Volcano Nyiragongo’s activity. The NASA article says: “Reports of low-level activity at Nyiragongo began in March 2009 and persisted through May, according to the Volcanism Blog. On May 5, 2009, the United Nations Institute for Training and Research Operational Satellite Applications Programme (UNOSAT) released a report of volcanic hotspots at Nyiragongo detected by NASA’s Moderate Resolution Imaging Spectroradiometer (MODIS) sensors. MODIS detected hotspots on six different occasions between April 10 and May 4, 2009.”   As part of its research programme, UNOSAT is developing tools and monitoring methodologies to assess exposure and vulnerability in volcanic areas. These tools are being developed with disaster risk reduction practices in mind, and to support the implementation of the Hyogo Framework for Action for disaster risk reduction. UNOSAT is currently collaborating with the University of Geneva to develop a method to produce exposure-based risk maps for volcanic ash fallout. The methodology implies a probabilistic hazard assessment using the numerical model Tephra2 (Bonadonna et al. 2005) combined with a study of the elements at risk obtained with free and easily accessible global data. The method is currently being elaborated on the Cotopaxi and the Reventador, two Ecuadorian active volcanoes, in order to help preparedness for volcanic ash fallout in future volcanic scenarios in this region.