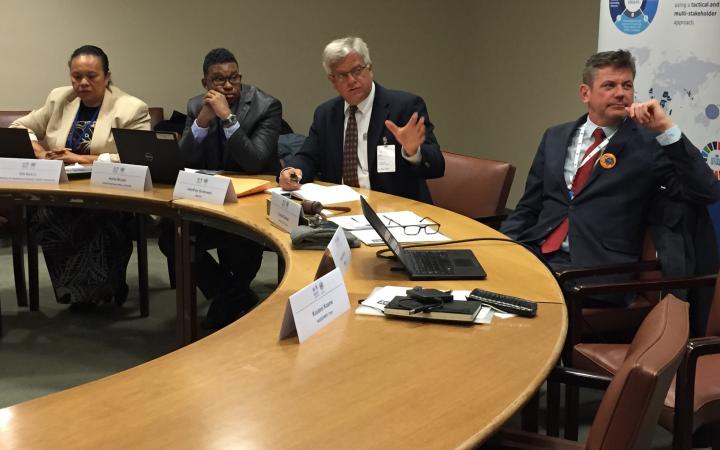 5 March 2019, New York, USA - A new web-version of the StaTact tool was launched by UNITAR and UN Statistics Division (UNSD) at the side event of the 50th Session of the United Nations Statistical Commission (UNSC) on 5 March 2019 in New York. The side event show-cased experiences of the two pilot countries - Togo and Grenada.

StaTact is a tactical action planning tool addressing and resolving measurement related data gaps in support of monitoring the SDGs in a multi-stakeholder fashion through improved institutional arrangements. Excel-based versions of the StaTact have been piloted in 15 countries, including 13 African and Asian Least Developed Countries (LDCs) and one Small Island Developing State (SIDS). Grenada is the first pilot country for a web-based version of the StaTact.

In the opening remarks, Mr. Gabriel Gamez, UNSD, noted that the StaTact helps address data gaps challenges from a governance perspective in a realistically and non-costly way. The StaTact process has been further introduced by Ms. Elena Proden, UNITAR, followed by a demo of the new StaTact web-version by Mr. Geoffrey Greenwell, UNITAR. He has demonstrated a higher level of interactivity, easy navigability and visual upgrade of the new version of the tool.

Mr. Brizan, Chief Statistician of Grenada, shared their experience in using the StaTact for the upcoming workshop in Grenada in the following week. He emphasized the expectations that the StaTact will bring concrete action plans and commitment from the various stakeholders linking specific data related challenges with strategic priorities.

Mr. Kouassi, Chief Statistician of Togo, stressed the continued interest in the StaTact and reiterated the commitments taken by Togo in the follow-up of action plan made using the tool.

The presentations were followed by Q&A part with Ms. ‘Ofa Ketu’u, Director of the Statistics for Development Division, Pacific Community, as a discussant. She has provided a number of questions and comments from the perspective of the Asia-Pacific SIDS.

The event was attended by around 30 statisticians and was positively regarded. Next pilots of the StaTact are Grenada, Uganda, and Asia-Pacific SIDS. Check the web-version of the StaTact here and join the process: www.statact.unitar.org