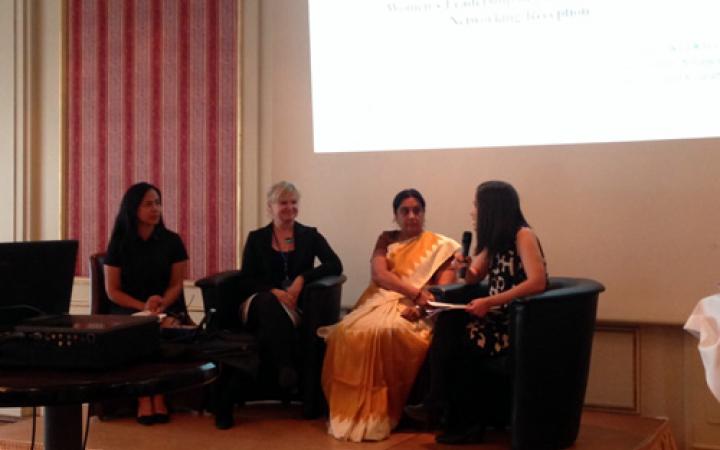 3 June 2015, Bonn, Germany - UNITAR’s Women’s Leadership Programme partnered with the Women’s Environmental and Development Organization (WEDO) to co-host a side event at the UNFCCC Forty-second Sessions of the Subsidiary Body for Implementation (SBI 42) and the Subsidiary Body for Scientific and Technological Advice (SBSTA 42), as well as the June session of the Ad Hoc Working Group on the Durban Platform for Enhanced Action (ADP2-9)

The reception brought together both women and men involved in the negotiations in the lead up to COP21, to discuss the progress being made to advance the role and leadership of women in multilateral climate change decisions.

Emily Fraser, leading UNITAR’s Women’s Leadership Programme along with Bridget Burns, Communications Director at WEDO opened the reception by highlighting the contribution that initiatives such as the Women’s Leadership Programme (WLP) and the Women’s Delegates Fund (WDF) play in closing the gender gap in Climate Change negotiations and decision-making. The session then moved on to a panel discussion between gender champions, Kalyani Raj, All India Women’s Conference/ Women and Gender Constituency, Verona Collantes, Intergovernmental Specialist, UN Women and Fleur Newman, Gender Focal Point, UNFCCC. The discussion was moderated by Anniete Cohn-Lois, Negotiator for the Dominican Republic and WDF Participant.

The discussion outlined the important role that women will play at COP21 in Paris. Fleur Newman, commented that many Parties already committed to a first step in Doha and Lima promoting women’s participation in the decision-making processes. Paris will provide an opportunity to put these decisions into practice and harness women’s potential and knowledge and include a female voice in the decisions to be agreed to in Paris.

Panellists also acknowledged that programmes such as UNITAR’s Women’s Leadership Programme, which works with UN Women and across the UN System, with the mandate to build skills, knowledge and capacities of government officials accredited to the United Nations and its entities, is a great example of a tool at the disposal of Parties to assist in achieving their goal.

Photo: panellists of the event