How One Woman Is Changing the Lives of Many in Kabul 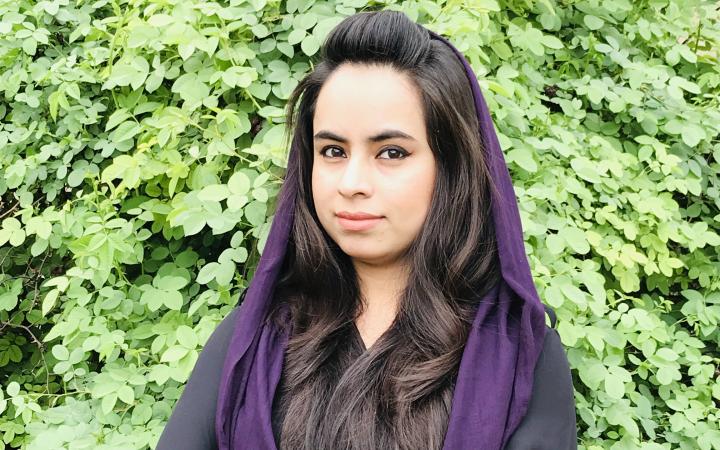 The vast majority of women around the world have faced, at least once, challenges solely because of their gender. Born in Kabul, Afghanistan — considered one of the most dangerous countries in the world in which to be a woman — Sheewa Mohammadi Kabir had to deal with gender inequality and inequity from a very young age. Many of these barriers came as a consequence of the country’s tumultuous recent past. Now she is challenging these barriers and changing her country’s present and future.

In the last three decades, Afghanistan has been occupied by communist Soviet troops, US-led international forces, and in the years in-between has been ruled by militant groups and the infamously oppressive Taliban. Once a country that enjoyed progressive women’s rights — Afghan women were first eligible to vote in 1919, in the 50s gendered segregation was abolished and in the 60s a new constitution brought equality to many areas of life, including political participation — after the emergence of the Taliban in 1994, Afghanistan became hostile for women and girls. They were banned from studying, working, and leaving the house without a male chaperone, among other restrictions. The Taliban were ousted from power at the end of 2001, but gender violence and discrimination still continues all over the country. Thanks to women like Sheewa, however, change is on the way.

Since she was little, Sheewa already felt the urge to do more for herself and those around her but she soon realized the consequences of gender discrimination at school. “Unfortunately, the number of girls studying was decreasing because of the political situation. Most families were not allowing girls to go to school and many of them still don’t value girls’ education, so this is something I grew up with”. 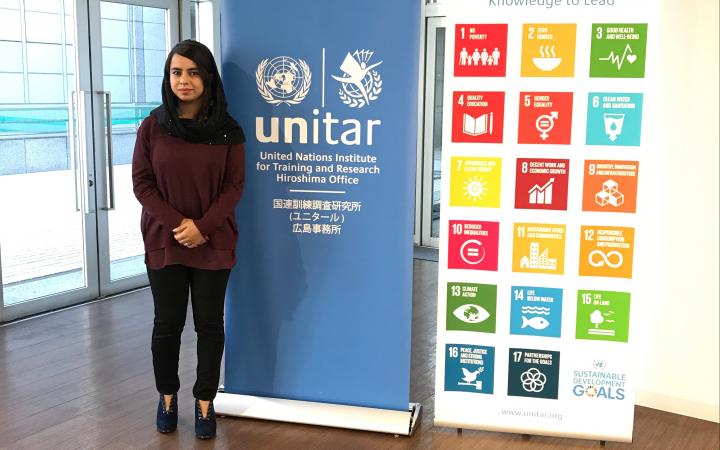 Sheewa continued her studies despite the odds and eventually became an English teacher, but she wasn’t satisfied. “I did teach English for a couple of years in a private university, but I didn’t have a platform where I could make much of a difference. So, I decided to change my career”. While Sheewa was working with an NGO and volunteering in a project to support working children to go to school, she came across an ad on social media about the UNITAR Hiroshima Women’s Leadership Programme for Afghanistan, created to empower junior to mid-level young female professionals. Sheewa was selected for the programme, participating in a workshop in Kabul, followed by a 15-day workshop in Hiroshima along with 19 other women like her. However, she encountered some resistance from her family. “Although my father isn’t against our education, he fears the community and fears the people.” For Sheewa, this wasn’t just a matter of travelling abroad. “It was a matter of challenging my family, of taking risks and breaking boundaries. It was a private revolution for everyone around us. I was the first woman in the family to travel alone and achieve this big dream of mine”.

Sheewa ended up receiving her father’s blessing before going to Hiroshima but she wasn’t prepared for what was yet to come. “I was so awestruck by the environment, the people, how respectful, kind and well behaved the citizens, the mentors and the UNITAR staff were. The topics we learned during the workshop were amazing, but I’ve learned also a lot about the community we were in, things like how they behave on the streets, the working women… it was wonderful”. For her, it was a life-changing experience.

“It helped me find myself. Before, I didn’t have the courage to say no, but I have it now. If people don’t listen to me, I’ll make them listen and I don’t accept any excuses until I’m convinced it’s the right thing to do. It was a wakeup call and I came back another person, more confident, more empowered, and I fear no one anymore”. 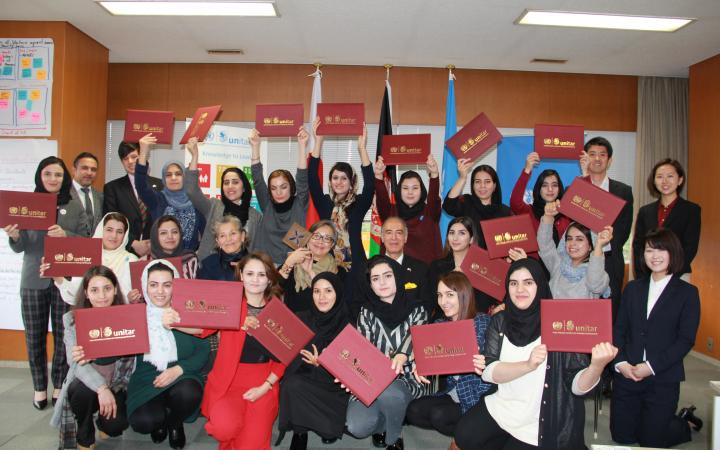 When Sheewa returned to Kabul, she started working on many projects of her own. “I started my own NGO along with three friends to attend to children, youth and women. I have now teams of volunteers. We fundraise to buy clothes and food for the working families. We are creating a cycling library for working children, where the volunteers take turns to go to different areas offering free books and we also organize gatherings for children on book reading. I want now to expand my volunteer groups and find more donations to help these children pursue their education”. Through her NGO, Sheewa is also engaging women, youth, government officials and the private sector in political discussions.

Sheewa is also working on projects related to gender issues. I’ve recently reviewed a gender policy for an international organization by myself and I’ve created a gender policy for the office I’m working in. There are 54 people working there but only 12 of them are female and there are no women in the senior management team nor even in a lower level of management. I’m also proposing a management training to empower our female staff. I delivered everything to HR and now I’m waiting for it to be reviewed and hopefully approved by the board of directors”. Sheewa is also part of the Afghan Intellectual Movement (AIM) along with other women and men working for peacebuilding in Kabul.

Sheewa also wants to share what she learned during her fellowship. “I’ve shared the materials already with my colleagues, but I want it to get to a larger number of women. I want to train women so they can confidently go for management and leadership positions. Women are so often kept away from the opportunities they deserve and which are their rights, and many of them accept it. I want to show them that this isn’t right and that they are doing injustice to themselves, that they should stand up for their rights, do whatever they like and make their own choices. No one was happy for me to participate in this fellowship and for going this far away from home, but I did it”. This is just the beginning for her.