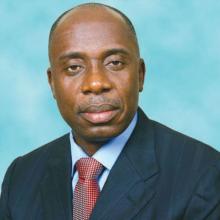 Mr. Chibuike Amaechi is Minister of Transportation of the Republic of Nigeria under the Muhammadu Buhari administration. He has been an active politician in Nigeria for more than three decades, serving as Governor of the Rivers State (2007-2014) and holding a number of government positions in different offices, including the Nigeria National Congress, where he was State Secretary for Administrative Affairs, and the Democratic Party of Nigeria, where he was State Secretary of the Supreme Committee of the Party. He was also the pioneer Chairman of the Conference of Speakers of State Legislatures of Nigeria for two terms. As Governor of the Rivers State, Mr. Amaechi worked to reduce poverty by a significant percentage, almost doubled social spending and with a special focus on health and education, and increased public investment in capacity building for young scholars.