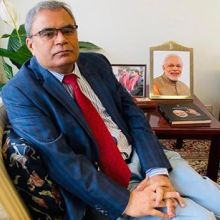 Ambassador Indra Mani Pandey is Permanent Representative of India to the United Nations and Other International Organizations in Geneva. Prior to this appointment in September 2020, Ambassador Pandey served as the Ministry of External Affairs as Director General in charge of the Disarmament and International Security Affairs Division from August 2018 to August 2020.

Earlier in his career in the foreign service, he served as Ambassador to Oman from August 2015 to July 2018, and Deputy Ambassador to France from January 2013 to July 2015. Other assignments include Director of Counter Terrorism and Director of the Americas Division of the Ministry of External Affairs, and Counsellor (disarmament) at the Permanent Mission to the Conference on Disarmament  from September 2003, in addition to postings in Islamabad and Kabul.