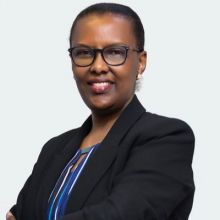 Ms. Valentine Rugwabiza is the Special Representative of the Secretary-General for the Central African Republic and Head of the United Nations Multidimensional Integrated Stabilization Mission in the Central African Republic  (MINUSCA). Prior to this appointment and since 2016, she served as Permanent Representative of Rwanda to the United Nations and non-resident Ambassador to Colombia and Jamaica. Ambassador Valentine Rugwabiza has worked for more than thirty years on African and global development issues in both the corporate and public sectors. She served as a cabinet member in the Government of the Republic of Rwanda from 2013-2016 successively as a Minister for East African Community Affairs and as the Chief Executive Officer of Rwanda Development Board. She was the first and only ever female appointed to serve as Deputy Director-General of the World Trade Organization from 2005-2013.