5-7 February 2020, New York, U.S.A – The United Nations Institute of Training and Research (UNITAR) New York Office, organized Women in International Security and Cyberspace Fellowship sponsored by the Australian Government. This three-day training was hosted in the United Nations Headquarters.  The training was attended by a group of 28 women, coming from different regions around the world, was sponsored by the Governments of Australia, Canada, and the U.K., and consisted of three sessions held between 5 and 7 February 2020, which focused on Cyber Policy, Conflict Resolution, Leadership and United Nations Negotiations.

During the welcoming remarks Mr. Marco A. Suazo, the Head-of-Office of UNITAR Office in New York, delivered welcoming remarks  to the participants and introduced Ms. Izumi Nakamitsu, United Nations Under Secretary-General and High Representative for Disarmament Affairs to officially open the fellowship. The key note remarks examined the hyper connectivity that we are currently experiencing through achieved advances in cyberspace, and the impending threats that come with such connectivity. Ms. Izumi Nakamitsu, mentioned that ensuring inclusion and diversity within cyber policy to properly address gender bias is necessary, as research clearly indicates that women’s inclusion increases the effectiveness of UN disarmament efforts. Ms. Izumi Nakamitsu mentioned the need to build representation by women in the United Nations and within UN processes to combat cyber threats. She concluded by stating that such participation of women is critical to international peace and security in cyberspace, however to achieve such gender parity, specific and outlined efforts will be required.

Ms. Kerstin Vignard, Deputy Director of the United Nations Institute for Disarmament Research, and Ms. Kat Jones, delegate of the UK Foreign and Commonwealth Office, focused on multilateral discussions on ICTs and International Security. They presented detailed information about UN GGEs and the OEWG.

Following this introductory session, Ms. Alison Pytlak, from the Women’s International League for Peace and Freedom, and Ms. Fitriani, from the Indonesian Centre for Strategic and International Studies, gave an informative session concerning civil societies perspective on the GGE reports. In addition, the panelists covered participation, representation of women, and gender norms as structural considerations during their session. They also discussed the development and use of ICTs for military purposes, including how international law applies to such use.

Ms. Renata Hessman Delaqua, official from the United Nations Institute for Disarmament Research presented during the last morning session reviewing the 2018 agenda for disarmament. Further, analyzing deliberations during this last disarmament agenda showed that empowering women and ensuring their equal participation of disarmament and arms control decision-processes, leads to more effective and inclusive negotiations. The day concluded with a panel discussion on the framework for responsible state behavior in cyberspace, with an eye on the GGE reports and the next steps. The panel was facilitated by Mr. Daniel McBryde, Department of Foreign Affairs of Canada, with the interventions of Ms. Johanna Weaver, from Australia, Ms. Gillian Goh, Office of Disarmament Affairs of the UN, Ms. Veronique Christory, International Committee of the Red Cross, and Ms. Shariffah Rahidah Binti Syed Othman, National Security Council of Malaysia.

The final session of the day consisted with the presence of H.E. Mr. Mitch Fifield, Australia’s Ambassador and Permanent Representative to the United Nations, and H.E. Mr, Mark Zellenrath, Netherlands Deputy Permanent Representative to the United Nations, who hosted a speed mentoring for the participants where they broke down into small groups providing an opportunity for mentees to speak and share experiences with a broad range of colleagues working in International Security and Cyber Policies. 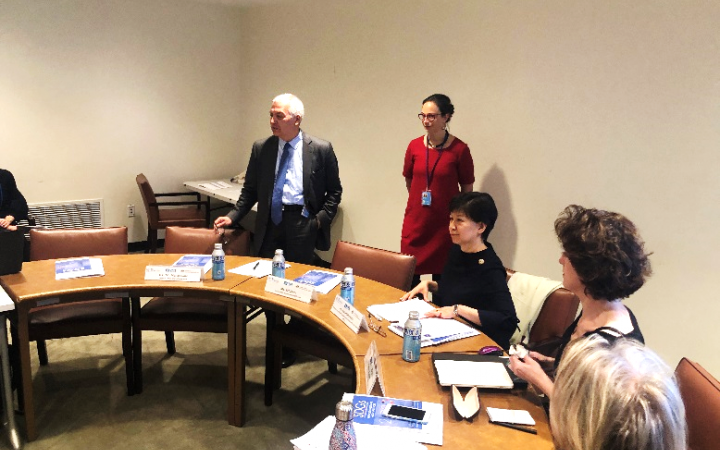 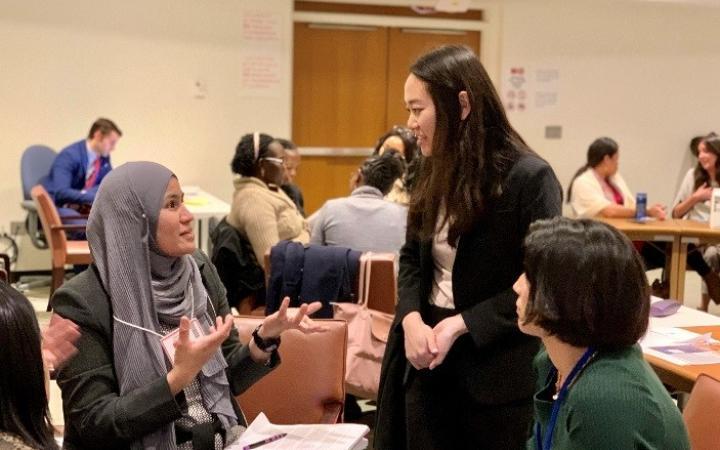 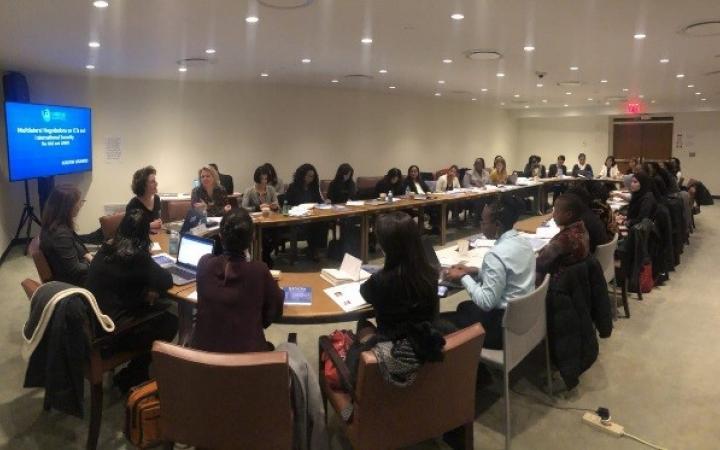 On 6 February, the focus was on conflict resolution, mediation and negotiation. It was launched by Mr. Pelayo Alvarez, Programme Coordinator of UNITAR Office in New York, who introduced Professor Alexandra Carter of Columbia University

The interactive and participative workshop covered active listening skills, negotiating both in the short-term and the long-term, and interest-based negotiation. Professor Alexandra Carter concluded her morning session with a 4-way listening and role play exercise in which participants learned that maximizing points of groups, as opposed to individuals, are not mutually exclusive. Professor Alexandra Carter continued the day during the afternoon session with further advanced negotiation exercises.  For the final part of the workshop, participants were divided into groups of four, and went through a mock negotiation using the frontiers of their countries and collaborating to reach an agreement using all the tools learnt during the first part of the workshop. Lastly, a debrief on Situational and Environmental Factors that impact dispute resolution was then followed by an intensive role play on leadership and negotiation.

On 7 February, Mr. Suazo, the Head-of-Office of UNITAR New York, moderator for the session, delivered welcoming remarks and introduced Dr. Jimena Leiva-Roesch, Senior Fellow at the International Peace Institute, and Dr. Rebecca Webber Guadiosi, former US Diplomat to the United Nations. During their morning session both Dr. Jimena Leiva-Roasch, and Dr. Rebecca Webber Guadiosi, initiated their session by covering the UN toolkit delegates must have while negotiating, as well as providing an introduction to Women at the UN. The introduction was then followed by a Multilateral Simulation Exercise. The proceeding afternoon session built upon the earlier simulation exercise by continued interactive practice negotiations in which each participant was given differing directives to negotiate for on behalf of a fictional country. The simulation was followed by a debrief and a short overview on how to Mitigate Asymmetric Power.  The training concluded after 3 days of sucessful sessions and equiped the participants with the necessary skills for their negotiations, during the Open-Ended Working Group on Developments in the Field of ICTs in the Context of International Security (OEWG). The second part of the training will be held in July 2020 and sponsored by the Governments of Canada and New Zealand. 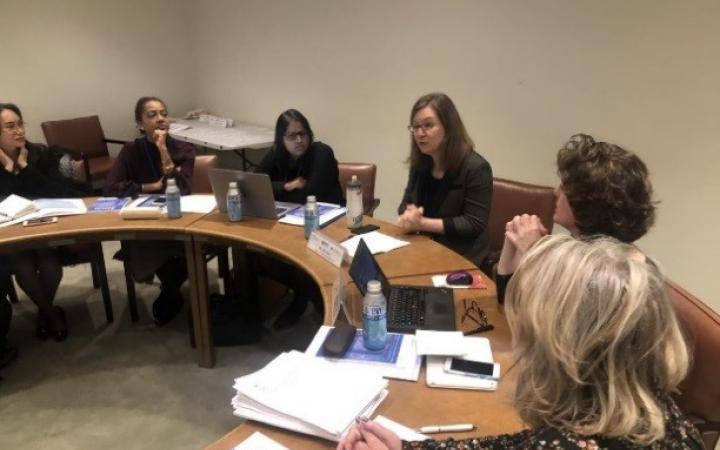 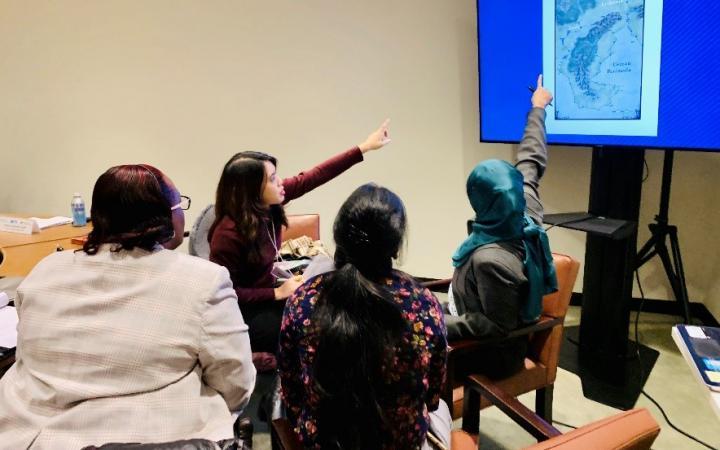 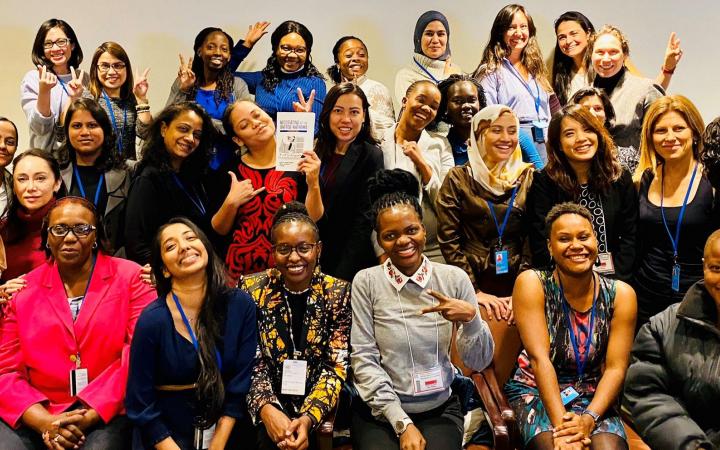