28 April 2016, Geneva, Switzerland - We are pleased to announce the appointment of Mr. Akif Gilalov, prominent businessman and philanthropist, as UNITAR Associated Fellow entrusted with supporting cross-cultural dialogue. Mr. Gilalov is a Chairman of the World Congress of Mountain Jews, the World League "Mind Free of Drugs!" as well as the founder and member of the Board of Trustees of a number of charitable institutions worldwide. He will contribute to UNITAR’s activities related to intercultural understanding and the practice of dialogue between various religious and ethnical groups. With the generous support of Mr. Gilalov, UNITAR’s Multilateral Diplomacy Programme will organize public conferences and cultural events promoting peace, tolerance and understanding. UNITAR welcomes Mr. Gilalov and his initiatives related to the support and promotion of the dialogue among different ethnical and religious groups. 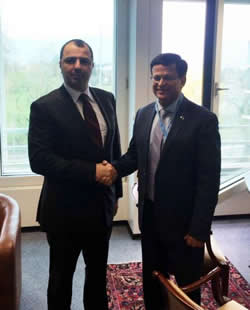