20 May 2016, Geneva, Switzerland – On 16 April 2016, 23:58 UTC, a 7.8 magnitude earthquake struck offshore of the west coast of northern Ecuador, near the coastal town of Muisne. The capital city, Quito, located 170 km from the epicenter, felt the effects strongly. According to the latest information provided by Ecuador´s Risk Management Office, 654 people were killed and 12,492 were injured. 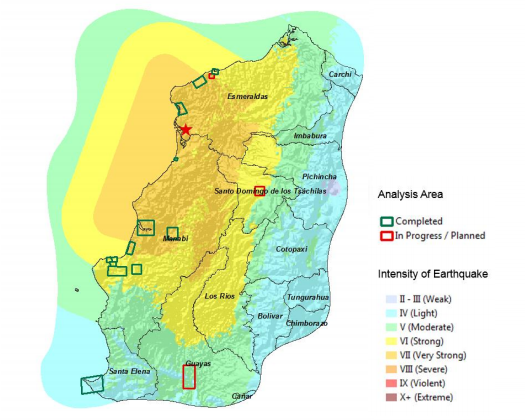 Immediately following the event, UNOSAT received a request from the United Nations Office for the Coordination of Humanitarian Affairs (OCHA) to provide satellite analysis for areas of interest. In turn, UNOSAT triggered the International Charter Space & Major Disasters, began its analysis and coordinated satellite mapping activities through the Global Disaster Alert and Coordination System (GDACS).

On 17 April, a few hours after the earthquake had struck, UNOSAT released its first product: a population exposure analysis using WorldPoP data that underscored the gravity and extent of the event, with over 80% percent of the population potentially affected by the tremors. 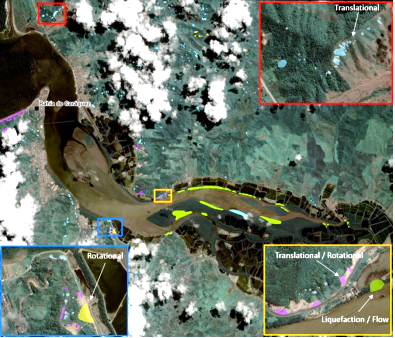 Over the next few days, UNOSAT collaborated with the Ecuadorian government and UN Country Team (UNCT) by providing damage assessments over targeted areas and with the British Geological Survey in order to create comprehensive landslide surveys, all of which can be found on our website. Additionally, we worked with European Commission Copernicus to combine datasets, thereby allowing us to provide more comprehensive results together covering all main areas affected by the earthquake.

Wendy Verónica Santos Saavedra from Ecuador´s National Secretariat for Planning and Development, summarized UNOSAT´s collaboration with the government in the following manner: “The support provided by UNOSAT has been very useful and a valuable contribution to the country. Your inputs are essential to plan the reconstruction of the area affected by the earthquake and have allowed us to generate additional sectoral information (education, health, social, territorial, etc.)”

According to our analyses, 1,790 buildings were affected by the earthquake, 110 of which are ‘critical facilities’ (educational, health or other important buildings). Finally, 558 landslides were detected by our partners from the British Geological Survey using data provided by UNOSAT. This information is made available for the recovery efforts to rebuild after the earthquake, thus helping to bridge the data gap from emergency situation to reconstruction.

Image 1: A map depicting the earthquake´s intensity by area & areas analyzed and in progress

Image 2: A snapshot of the co-seismic landslide inventory map over Manabi Province, produced in cooperation with the British Geological Survey