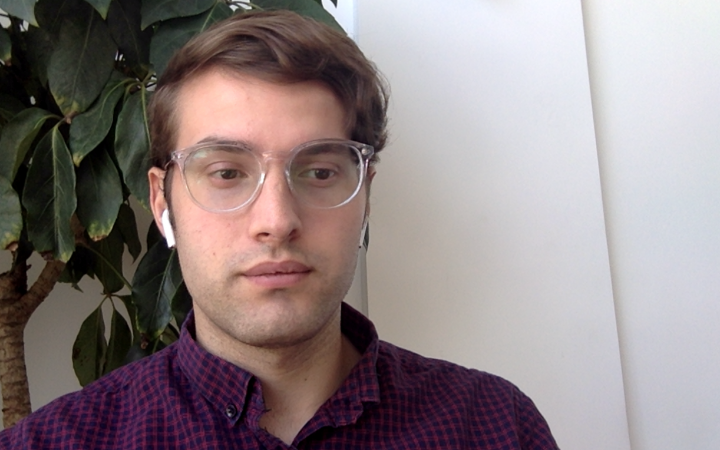 27-28 July, New York, USA, online workshop - The United Nations Institute for Training and Research's (UNITAR) office in New York organized a two-day virtual workshop, “Drafting Skills: Reporting and Communications” held on 27-28 July 2020. The workshop was attended by approximately 70 delegates from around the world via video conference. To begin, the participants were welcomed by Mr. Pelayo Alvarez of UNITAR. He then introduced the workshop’s facilitator, Mr. Sandy Singer, a Lecturer and Instructor in the UN-LCP English Language Programme and Consultant and Professor in the field of Written and Oral Communication for Business. Mr. Singer outlined the themes of the two-day workshop, which focused on major challenges and best practices for UN writing. This training was supported with funding allocated from the Swedish International Development Agency’s (SIDA) contribution to the UNITAR Strategic Framework Fund, under the programme ‘Leveling The Playing Field’ which focuses on the development of skills and knowledge of Least Developing Countries. 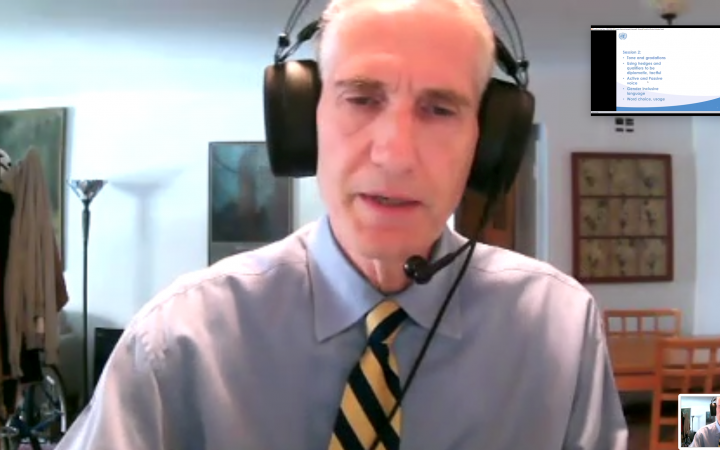 Mr. Singer began Session I of the workshop with a lecture on knowing your purpose and your audience, as this ultimately informs the content and tone of a report. He described the differences between formal and informal language and the appropriate circumstances in which to use both. Mr. Singer connected this usage to knowing one’s audience because this impacts language choice. He also stressed the importance of stating purpose early in a document, which led to an exercise on crafting purpose statements.

Mr. Singer then moved on to clarity and conciseness when drafting a report. He explained that the best way to improve writing is to eliminate unnecessary words and to convey the point as simply as possible. The participants were then led through another exercise on how to effectively shorten sentences. To wrap up the first session, Mr. Singer talked about sentence and paragraph length, expressing that sentences and paragraphs should be kept short and manageable. This concluded the first day of the workshop. 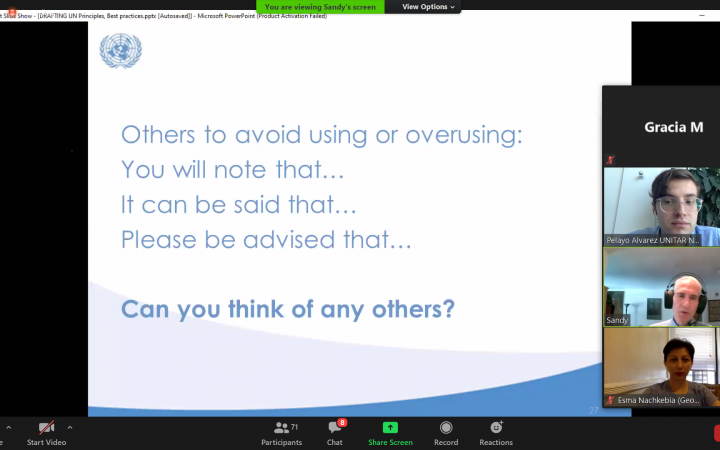 On the second day of the workshop, the participants were again welcomed by Mr. Pelayo Alvarez of UNITAR, who then re-introduced Mr. Sandy Singer. Session II focused primarily on choosing the right wording and tone for a report. Mr. Singer stressed the importance of utilizing “Plain English” to avoid complicated language. He also emphasized the differences between active and passive language and situations in which to use both. For example, passive language is useful when you need to be tactful and diplomatic, whereas active language is more direct.

This led to the discussion on tone and how to adapt tone to fit the type of report, its purpose, and its audience. Mr. Singer highlighted the nuances present in tone and recommended using euphemisms, passive voice, and qualifiers in softening tone so as to not offend or blame. He additionally touched on the inclusion of gender-neutral language in writing for the UN, such as using ‘spokesperson’ as opposed to ‘spokesman’. To close out the workshop, Mr. Singer took the participants through another exercise utilizing these strategies to adapt tone. As the session came to an end, both Mr. Singer and Mr. Alvarez thanked participants for their enthusiastic participation in the online workshop.