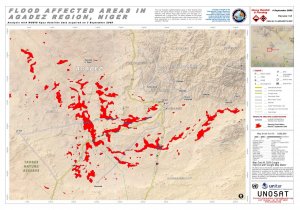 Through the use of satellite imagery, UN agencies, NGOs and Governmental entities are able to have both large area overviews as well as detailed maps of the situation. UNITAR/UNOSAT works closely with the International Charter Space and Major Disasters (Space Charter), which facilitates the acquisition of satellite imagery for this event. As a Charter User Intermediary, UNITAR/UNOSAT acts as a gateway for the UN to the Space Charter and ensures the requirements for geo-spatial information from users operating in West Africa are met, thus facilitating improved decision-making. In the same capacity, UNOSAT also triggers the Space Charter in support of UN sister agencies.

In its efforts to continuously improve map production, the recently released Google MapMaker road data have proven a valuable source of information. This dataset further improves UNOSAT’s rapid mapping capacity and feedback from colleagues operating in flood affected areas is excellent: “This is another piece of wonderful job. Thumbs up!“