25 February, Geneva Switzerland – The Artificial Intelligence (AI) algorithm developed by UNOSAT with the support of UN Global Pulse, the UN Secretary-General's innovation initiative, was used in the recent rapid mapping activation for seasonal floods in Mozambique.

UNOSAT’s Rapid Mapping Service first introduced AI-based methods (UNOSAT FloodAI) during the rainy season in the Asia-Pacific region with a targeted focus on countries affected by the southwest monsoon season from June to September 2020. It was in that context, in July 2020, that the AI algorithm became operational for the first time following a request by UNOCHA after heavy monsoon rains around the Brahmaputra river and in the Sylher district in Bangladesh.

In January 2021, following heavy seasonal rains and the tropical cyclone Eloise-21 that struck the central parts of Mozambique, UNOCHA’s Regional Office for Southern and Eastern Africa (ROSEA) requested the activation of UNOSAT’s Rapid Mapping service in Mozambique. For several weeks, our analysts monitored at-risk areas for flood damage using the available satellite imagery. On 22nd January, the International Charter Space and Major Disasters was triggered by UNOSAT on behalf of UNOCHA, and several assessments and analysis products were shared with OCHA ROSEA’s coordinating team and made available online.

During the operations, the Sofala region was identified as an area of particular interest as most of the flooded area was contained there. The pipeline developed in-house, allowed to routinely monitor the area over the flooding period, as it automatically handles downloading, pre and post-processing of the images available. Then, the UNOSAT FloodAI model was used to extract the water extent from selected images. As a result, automatic AI-based analyses were produced for images captured by the Sentinel-1 satellites on the 25th, 26th, and 31st of January.  In addition, an analysis illustrating the aggregated floods over a period of two weeks was also produced leveraging the benefit of AI to provide timely and robust results.

“AI tools developed in-house allow organizations like UNOSAT to map large events at scale instead of as possible, which is a huge and important change.” Lars Bromley, Specialist, UNOSAT 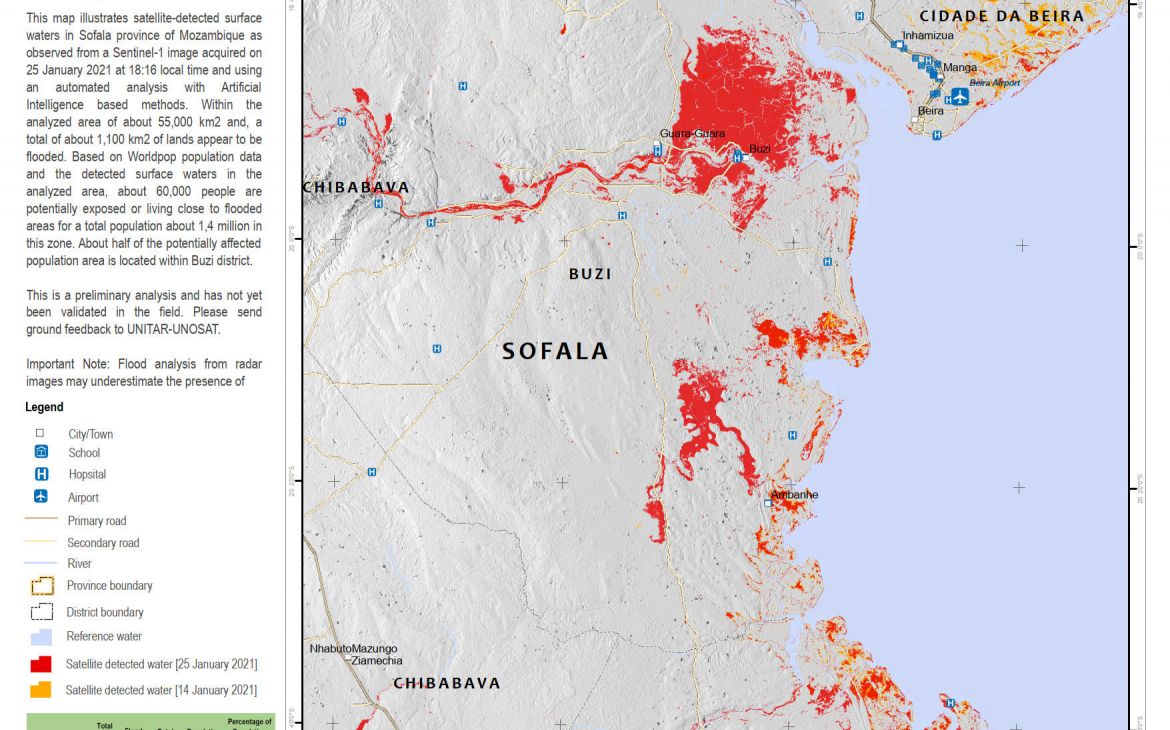 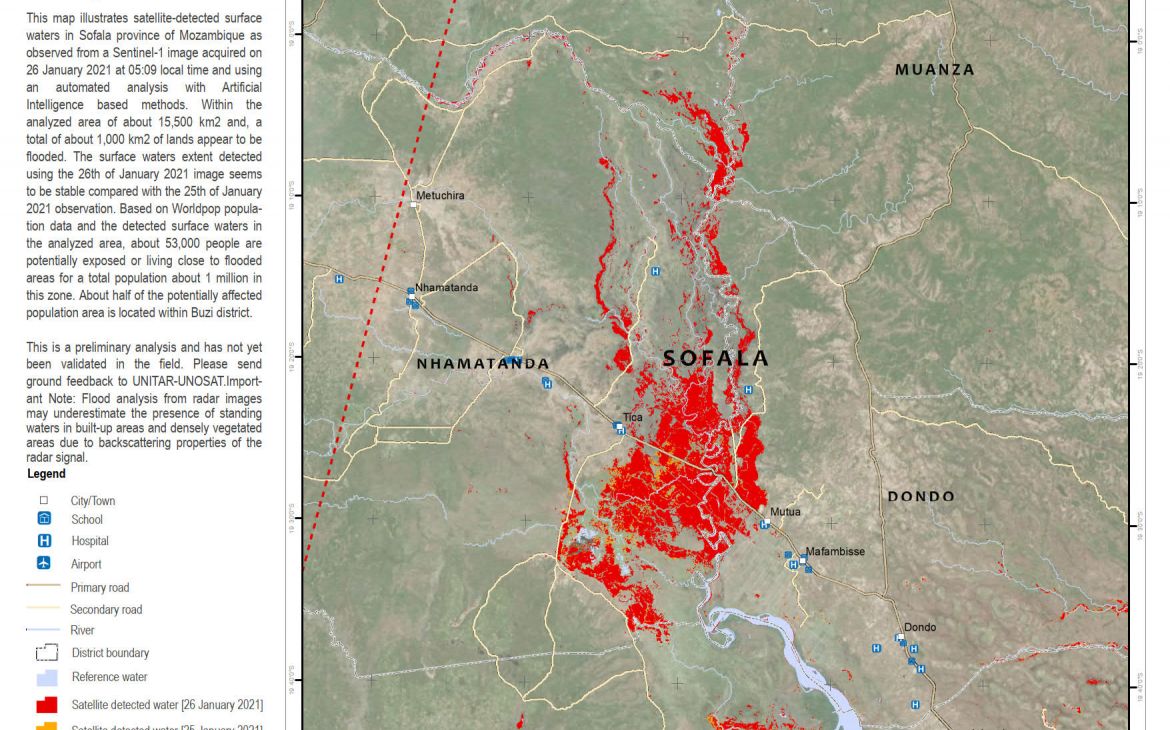 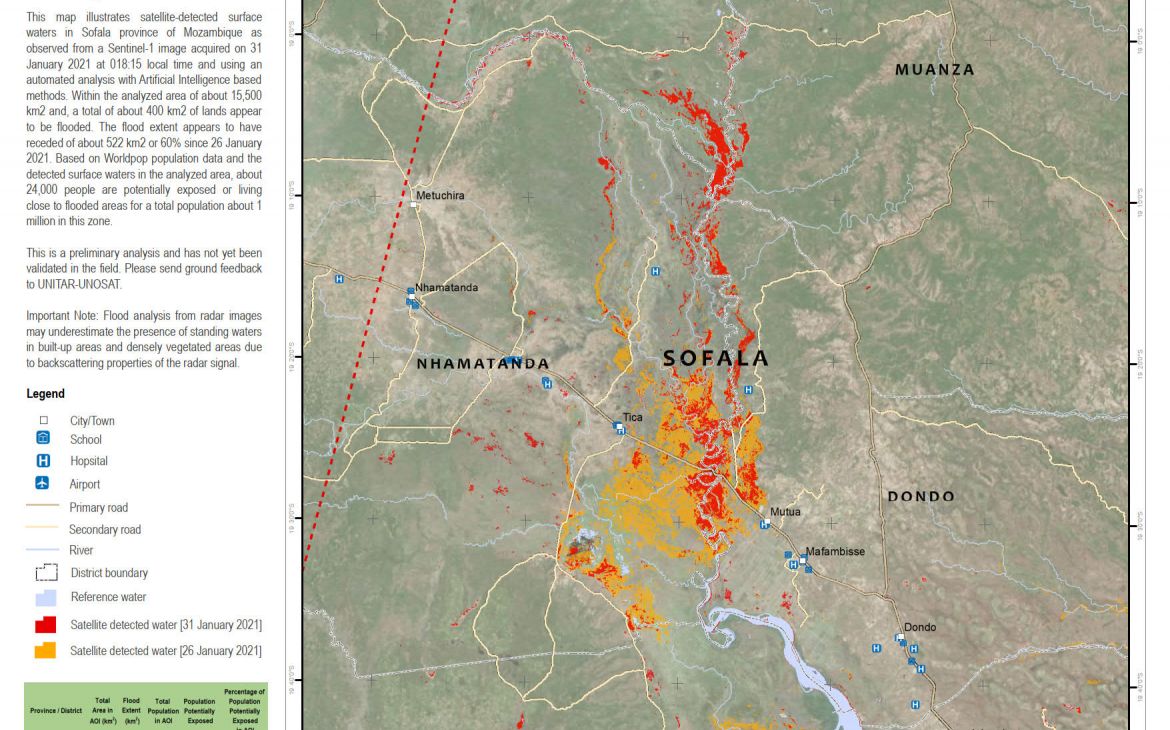 This new method allows UNOSAT’s team to increase the number of areas being monitored. Leveraging the machine’s rapidity and automation also allows to extend the analysis and the monitoring period. From a disaster risk management standpoint, this method can also greatly support both national authorities and international emergency response organizations to further anticipate the evolution of the situation and thus optimize their operations plan, contributing to reducing loss of life and mitigate structural damage.

The UNOSAT Flood AI method was presented during a high-level awareness raising workshop in December 2020 co-organized by the Ministry of Science and Technology, Higher Education and Technical-Professional (MCTESTP) of Mozambique and the UN Technology Bank. The National Institute of Disaster Management (INGC) expressed their high interest and recognized the potential in integrating the timely outputs produced by the AI-based method in their operational work in the near future.