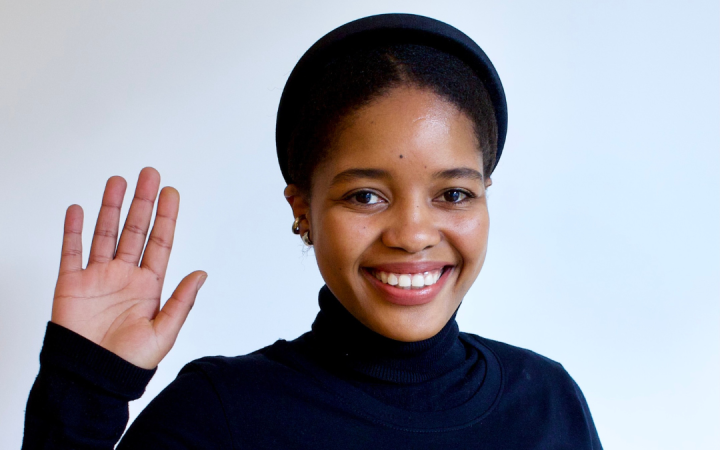 “Growing up, I felt very privileged to have a computer at home”, recalls Esihle Makitshi. To an extent, she was, indeed. The digital divide in countries such as South Africa, where Esihle is from, is a setback for children and youth pursuing quality education and professionals trying to enter the job market. But there was yet another setback for her. One that most likely all women – let alone black women – face in life: lack of representation.

The issue with lack of representation is that, as Marian Wright Edelman brilliantly puts it, “you can't be what you can't see.” Seeing ourselves represented gives us a sense of value and belonging, a feeling Esihle did not particularly experience in her school’s computing classes. “I told them I was interested in computers and wanted to learn more. I was lucky enough to be one of the few girls chosen to be a part of that class and, as far as I recall, the only person of colour as well.”

The reality was not different when she entered the university to study computer science. Nonetheless, Esihle persevered with her studies and found an internship opportunity with the UN International Atomic Energy Agency (IAEA) in Austria. The experience gave her a glimpse of how things could actually be. "When I went to the UN in Vienna, I saw for the first time people who look just like me, are passionate about their roles and are confident to speak up. They have so much knowledge and fight for what they believe is right! You know, there are so many people who could have access to this if they had the chance to see themselves represented as such. And if I had seen that representation a lot sooner in my life, I would have been more confident professionally and personally."

Unfortunately, the statistics back this up. Worldwide only 30 per cent of tech science and technology professionals are women18, and most do not occupy leadership positions.

Men in my field are judged on their potential, whereas women by their past accomplishments. There is always so much more you have to prove as a woman to get leadership roles, participate in specific projects and be acknowledged for your contributions.

Esihle, fuelled with motivation to be a woman in tech that other girls and women look up to, went from providing basic support as an intern to playing a more crucial role at IAEA. Her career since then has only progressed. She has worked at the International Air Transport Association (IATA) in Canada, and in the IT department of a management consulting company subcontracted by the European Commission to work on monitoring and evaluation of projects in Belgium. Today she lives in Ireland and fills the position of safety project manager for the worldwide known instant messaging platform WhatsApp.

As time passed and she progressed in her career, Esihle’s passion for all themes related to women's empowerment grew too. Eventually, she came across UNITAR’s e-Workshop on Gender, Women’s Leadership and Mentoring and decided to give it a chance. “There are a lot of people who think that being a leader is being loud and aggressive, but not everyone is like this. There are people with softer voices and a quiet confidence about them. Sometimes, they are not seen as strong leaders, even though the results speak for themselves, and they run successful teams. So, what drew me to this e-workshop was that I wanted to discover my own leadership styles.”

Esihle did not regret her decision. “The whole experience was fantastic! I left every single day of the e-workshop feeling empowered and inspired by all the people I spoke to.” One of her favourite aspects of the experience was the facilitator.

She had a contagious energy and brought all the concepts we were learning to life with real examples. Instead of saying ‘this is how you give an impactful speech', she would give us tactical tools that we could use to implement into our daily lives. We would also break out into small groups where we had one-on-one conversations and collaborative tasks. So, it was very practical too.

By the end of the experience, Esihle found what she was looking for. “I got to identify the leadership style that I liked the most, and one big part of it includes active listening.” On top of that, Esihle connected with other participants and built a network. “We have a chat group where we keep in touch and share resources. I get to follow these amazing women who are doing incredible things! Some of them are in conflict areas, and they are doing so much with so little.”

Now, the young powerhouse, who likes to kayak and do Sudoku in her limited spare time, wishes to leave as much of an impact as the women she admires. "I want to empower others because you can only climb if you lift as well.” And she is on her way to doing so. Esihle is becoming an influential activist, and we cannot wait to see what the future holds for her!