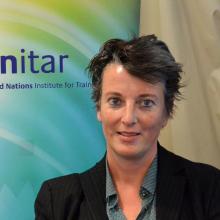 Director of the Centre for International Peace Operations (ZIF)

Since 2009, Dr. Almut Wieland-Karimi is the Director of the Centre for International Peace Operations (ZIF), in Berlin. She is member of the Advisory Board of the Geneva Centre for Security Policy (GCSP), member of the Senior Advisory Council of the Bundeswehr Command and Staff College (Führungsakademie der Bundeswehr) and the Honorary Executive Director of the NGO “Mediothek Afghanistan e.V.”.

After her PhD, obtained in 1995 at the Zentrum Moderner Orient (ZMO) of the Humboldt-Universität in Berlin, Dr. Almut Wieland-Karimi worked from 1998 to 2009 for the Friedrich Ebert Foundation covering different positions in different countries. From 1998 to 1999 she was Project Assistant in the Argentinean office in Buenos Aires; from 2000 to 2002 she has been Desk Officer for the Development Cooperation and Conflict Transformation programme in both Bonn and Berlin; and from 2003 to 2005 Dr. Almut Wieland-Karimi worked as Founding Director in the newly established Friedrich Ebert Foundation office in Kabul. Finally, from 2006 to 2009, she acted as Country Director for USA and Canada for the Friedrich Ebert Foundation in Washington DC.

Dr. Wieland-Karimi has an extensive list of publications that moves from her PhD dissertation on the Islamic mysticism in Afghanistan (Islamische Mystik in Afghanistan: die strukturelle Einbindung der Sufik in die Gesellschaft) to her most recent publication “Germany - a Civilian Power”.