Celebration of the 50th Anniversary of UNITAR 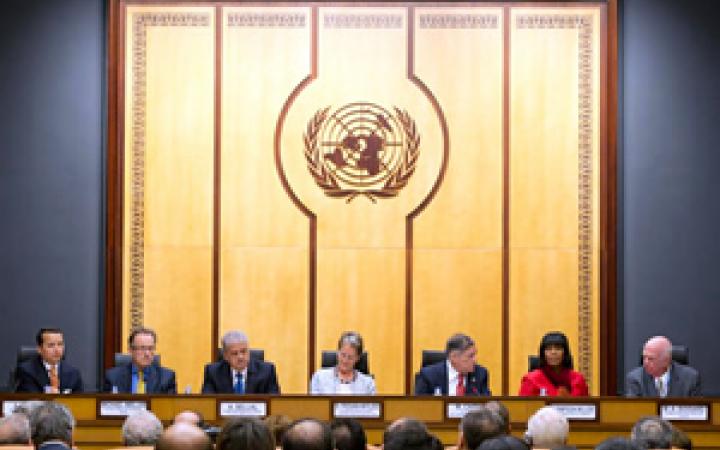 UNITAR celebrates its 50th anniversary since its inception in December 1963.  The Institute organized commemorative events both in Geneva and New York.

28 November 2013, Geneva, Switzerland – The United Nations Institute for Training and Research (UNITAR), in cooperation with the Group of 77 and China, Geneva Chapter, organized a high-level event to celebrate the 50th anniversary of UNITAR, and to sign a Framework of Cooperation between G77 and UNITAR.

All Permanent Missions based in Geneva were invited to the event and it was attended by more than 150 participants, including numerous Permanent Representatives and Ambassadors, with the presence of Prime Minister of Algeria and Prime Minister of Jamaica.

His Excellency Mr. Miguel Carbo, Ambassador and Permanent Representative of Ecuador to the WTO, Chairman of the G77 and China, Geneva Chapter opened the event by highlighting the importance of cooperation between G77 and UNITAR, followed by welcome remarks by Mr. Michael Møller, Acting Director-General of the United Nations Office at Geneva (UNOG), who congratulated UNITAR for its 50 year of service at the member states and welcomed the leadership of the G-77 in maintaining an effective and able United Nations to serve its  membership.

A former executive director of UNITAR, Mr. Marcel Boisard, who served for 15 years as the head of the Institute, took a retrospective glance at the Institute which has gone through difficult times but always had strong supporters who helped the Institute to continue serving the member states.  He also brought the attention of the audience to the fact that UNITAR and G77 were born almost at the same time, the first in 1963 and the latter in 1964, and that both served one another.

A short video illustrating current UNITAR training and learning was then projected to demonstrate how today’s learning and training are different from that of 1963, and that the Institute has come a long way in adapting the teaching and learning methodologies to constantly meeting the needs and requirements of its beneficiaries.

The Executive Director of UNITAR delivered a statement introducing UNITAR’s new strategic programme, and underlined the importance of the mandate of the Institute.  The Executive Director assured the audience that the Institute continues to enhance the capacity of government delegates to perform effectively through intergovernmental processes, and, building capacity of key change agents and institutions to translate global norms and policies into concrete action.  She ended by thanking the Algerian Prime Minister for his country’s generous contributions to create the Algerian Scholarship Fund, and also thanking the Chairman of G77 and China for signing the Framework of Cooperation.

A Framework of Cooperation between G77 and China, Geneva Chapter, and UNITAR was signed by the UNITAR Executive Director and the Chairman of G77 and China, Geneva Chapter.  In the Framework, G77 calls for more support from UNITAR in developing capacities of its members, and UNITAR renews its commitment to assist G77 countries by enhancing their capacities in the areas that are relevant to the United Nations.

Finally, the Prime Minister of Algeria, His Excellency Mr. Abdelmalek Sellal, delivered the keynote speech, in which he stated his appreciation to UNITAR for its valuable services to member states, and announced his country’s determination to support other G77 countries by setting up the Algerian Scholarship Fund, as well as to contribute 3 million euros to UNITAR’s general fund for the next 3 years.

The event was followed by a cocktail reception, which was made possible with the generous support of the People's Democratic Republic of Algeria and the Swiss Confederation.  In the reception, His Excellency Mr. Alexandre Fasel, Ambassador and Permanent Representative of Switzerland, delivered welcome remarks to congratulate UNITAR for its 50th anniversary, as well as to emphasize Switzerland’s commitment to continue supporting the Institute as a host country and a major donor to the Institute.

A cake cutting of the “birthday cake” marking the 50th anniversary of UNITAR was done by all invited speakers, with the Algerian Prime Minister leading the group.

17:00 Opening remarks by H.E. Mr. Miguel Carbo, Ambassador and Permanent Representative of Ecuador to the WTO, Chairman of the G77 and China, Geneva Chapter;

17:30 Viewing of a short video on “21st century UNITAR training and learning”.

17:45 A signing ceremony of the framework of cooperation between G77 and UNITAR.

Speeches (all in PDF):

H.E. Mr. Miguel Carbo, Ambassador and Permanent Representative of Ecuador to the WTO, Chairman of the G77 and China, Geneva Chapter 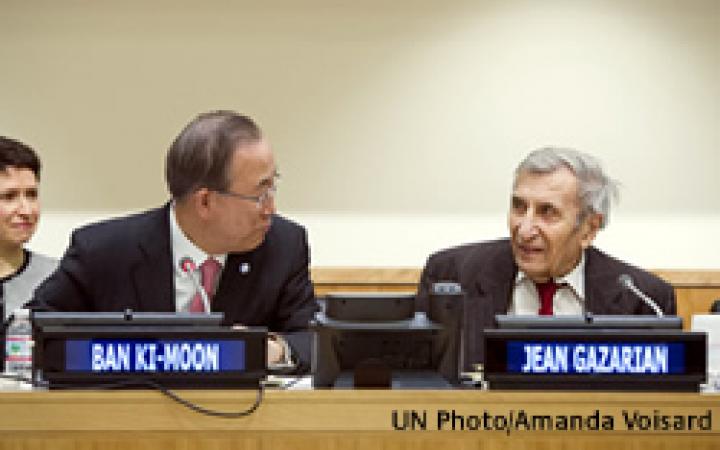 4 December 2013, New York, USA - The UNITAR New York office organized a high-level event to commemorate 50th anniversary of UNITAR with the presence of the UN Secretary-General.

Watch the video of the event (UN webTV website)