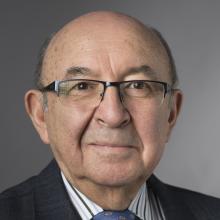 His Excellency Mr. Luis Gallegos is an Ecuadorian diplomat. He was Minister of Foreign Affairs of the Republic of Ecuador from July 2020 until March 2021. Previously, he served as Ambassador Extraordinary and Plenipotentiary, Permanent Representative of the Republic of Ecuador to the United Nations in New York and Geneva, in addition to postings in Canberra, Chicago, El Salvador, Madrid, Sofia and Washington, D.C. In addition to his longstanding diplomatic career, Ambassador Gallegos has been honored with various state decorations, recognitions and awards, including having received in 2011 the highest Ecuadorian decoration as recognition of his work for his country, as well as recognitions for his work in the fields of human rights and disabilities. Ambassador Gallegos is Chairman of the Board of Trustees of the Global UN Partnership for Inclusive Information and Communication Technologies, in addition to holding senior positions on other boards and foundations.

Ambassador Gallegos has served as a fellow to UNITAR. He holds a Juris Doctor Degree from the Central University of Ecuador, as well as a Masters of Arts Degree from the Fletcher School of Law and Diplomacy of Tufts University. He is married and has two children.