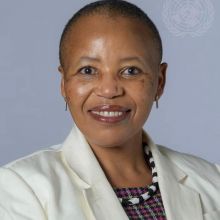 Ambassador Mathu Joyini is Permanent Representative of South African to the United Nations in New York and Chair for the Commission on the Status of Women (2021 to 2023). Previously, Ambassador Joyini served as Deputy Director-General at the Department of International Relations and Cooperation, heading the Diplomatic Academy and the Mediation Support Unit (since 2016). She has undertaken various international assignments, including as Permanent Representative of South Africa to the International Seabed Authority (2010 to 2015) and as High Commissioner and Ambassador to six countries in Latin America and the Caribbean. She has also held positions in the private sector in mining, finance and petroleum, among other fields, prior to joining Government in 2001.