Blue Helmets in (Dark) Times Ahead: Online Expert Briefing on the Future of Peacekeeping after COVID-19

The ongoing COVID-19 pandemic has grounded planes, and claimed or disrupted lives worldwide – yet despite the challenges, United Nations peacekeepers continue their vital work on the ground, carrying out their mandates while also supporting countries in their coronavirus response. As every year, the International Day of United Nations Peacekeepers presents an opportunity to pay tribute to the brave men and women who have served and continue to serve in UN peacekeeping operations, and to honour those who have lost their lives serving under the UN flag. Yet, in 2020, more than ever, it was also an invitation to reflect on the future of peacekeeping:

Organized in the format of an interactive and open-to-all discussion, this expert briefing did not only disseminate the informed insights of the panellists, but also engaged with the audience through a virtual Q&A session. It aimed to further contribute to the ongoing debates organized on this topic, such as the webinar hosted by the Challenges Forum. Finally, through a carefully tailored set of questions and the panellists’ rich background, the online briefing sought to further amplify voices and perspectives from the field, where these challenges ultimately play out. 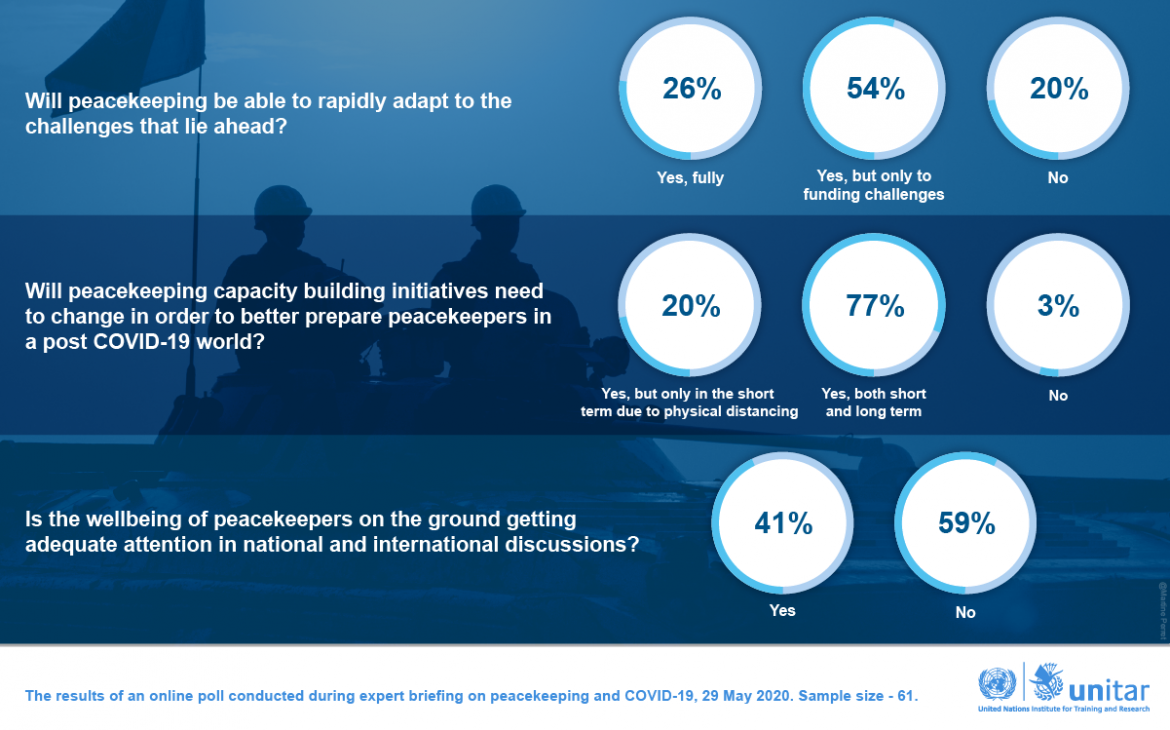 The highlights of the briefing will be included in a summary paper, which will be published on this page in the coming weeks. Stay tuned!

To contribute to the increased level of preparedness and response to COVID-19 related challenges, UNITAR’s Pre-Deployment Training and Advisory team and partners are working on a number of additional practical tools intended to support personnel and communities in mission settings in their fight against the disease. Read more by clicking on this link.

More about our work in peace and security: https://www.unitar.org/sustainable-development-goals/peace/our-portfolio

Check out our past and upcoming webinars here.

William Nortey is a Colonel with over 20 years’ military experience, and is a graduate of the Ghana Armed Forces Command and Staff College and Armed Forces Command and Staff College of Nigeria (Senior Division). He served as Commanding Officer, Deputy Director, Army Operations and Training, Force Management Officer in UNIFIL, Battalion Second-in-Command in UNOCI, Operations Officer in UNIFIL and UNOCI Force HQ. He carried out various planning and training functions at various levels including at the UN Force Headquarters, Ghana Army Headquarters Level, an Armoured Regiment and also at Battalion and Company levels in UN Peace Support Operations. He was a visiting facilitator at the Kofi Annan Peacekeeping Training Centre where he taught a range of peacekeeping subjects to an international audience since 2012.

Ms. Tilly Stroosnijder is an advisor & negotiator in the area of Gender to national and international security services with a wealth of international experience in various UN and EU security missions around the world including Kosovo, Afghanistan, Bosnia & Herzegovina, Indonesia, and Palestine.

Tilly was assigned as the first UN security sector gender advisor in the Kosovo Mission in 2003, for the implementation of the UN SC Resolution 1325 on Women, Peace and Security. At the national level, she cooperated in the development of the Dutch National Gender Action Plan and nationally she was the first civilian police woman working in mission areas. Tilly has established a Police Gender Unit and a Security Sector Gender Committee in the Ministry of Interior – the first in the Arab world – in the Palestinian Police. She managed the same in her former position in the Balkan area in 2003.

Tilly brings a broad experience and industry knowledge with her on Policing, Defense and Security Diplomacy.

Michael Langelaar is a Corrections Policy Officer with the Justice and Corrections Service, Office of the Rule of Law and Security Institutions, DPO since 2012. After several years in the field with DPKO, UNODC, and the EU, he currently supports PKO/SPM corrections components in CAR, DRC and in the MEANA region from the United Nations HQ in NY. He is the prison training and PVE focal point for his group. Mr. Langelaar has over 25 years of experience working in prison administration and operations, starting his career as an Uniformed Corrections Officer in Canada and deploying to a variety of peacekeeping and development environments supporting national prison services in the areas of prison accountability/oversight, prison security/crisis intervention, prison recruitment and training and a in a variety of other prison sectors. Michael has been focusing on enhancing visibility and political support for mandated delivery of specialized corrections initiatives in peace operations.

Ms. Claudia Croci is a Senior Specialist with the Division for Peace in UNITAR. Ms. Croci is responsible for the Pre-Deployment Training and Advisory Team, assisting Member States, international and regional organizations and other relevant stakeholders as they contribute to lasting peace and security. She has over 15 years of experience in capacity building, supporting individuals, organizations, institutions and societies from a systemic perspective.

Prior to joining UNITAR, Ms. Croci has worked with the UN Office for the Coordination of Humanitarian Affairs – Policy Development and Studies Branch – and the International Training Centre for Conflict Management and has collaborated with several intergovernmental and regional organizations, most notably the African Union, OSCE and NATO. Parallel to her professional career, she is active in the field of academic research through the involvement in different research projects. She is currently the Programme Manager of the Master of Arts in Humanitarian Action and Peacebuilding, jointly delivered by UNITAR and Oxford Brooks University.

For any information regarding the briefing or the topics discussed as well as any related queries, please contact us at pdta@unitar.org.