Register for the Webinar: Peace Education - Challenges and Opportunities 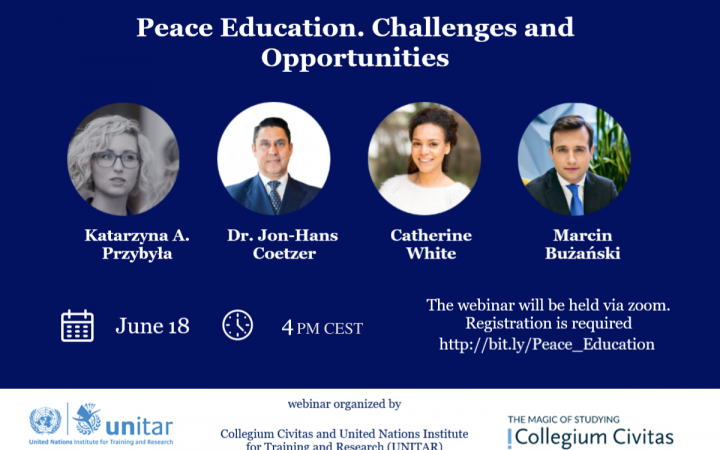 Dr. Jon-Hans Coetzer and Ms. Katarzyna A. Przybyła jointly supervise Strategic Peace & Conflict Studies (SPACS) programme. SPACS is a master’s degree programme organized by Collegium Civitas and UNITAR, based on experience and know-how of both institutions.  SPACS is the first programme of this kind in Poland, and one of the very few in Europe.  SPACS combines the knowledge from such fields as: international relations, sociology, psychology, international law, economy, human rights, security studies, and others to generate a comprehensive body of knowledge, and to arrive with 21st century solutions to 21st century problems. What distinguishes this program from others is a holistic and practical approach which enables students to develop new ways of thinking about current global problems. The main goal is to transform students into well-educated and skilled peacebuilders who will be able to assess and lead positive social changes at both the grassroots level and the high-policy level. The programme starts in October 2021, admissions are open.

Dr. Jon-Hans Coetzer contributes to the mission of the United Nations Institute for Training and Research (UNITAR). Jon-Hans creates high-value partnerships with different learning and educational institutions focusing on the areas of Peace, Security and Justice.  Jon-Hans has more than 25 years of experience in both higher education and vocational training in more than 22 countries. Dr. Coetzer served as Chief Academic Officer of Glion Institute of Higher Education, Academic Dean of IHTTI, Neuchâtel, as Chief Academic Officer of the EU Business School Group. He has an established record of working with a variety of higher education partners including private and public universities in the United Kingdom and in the United States. His research interests focus on the cross-cultural challenge in the international classroom of management studies and changes in higher education. Jon-Hans passionately believes in the need to rethink education in order to contribute towards a global common good for all.

Katarzyna A. Przybyła –is an expert in the field of peace and conflict studies. Katarzyna created International Peace and Conflict Studies at Collegium Civitas in 2018 (the current SPACS program is based on the IPACS experience and curriculum). She also serves as Director of Analysis and Senior Editor in the analytical center Polityka Insight. Katarzyna was a Fulbright Scholar in the Kroc Institute for International Peace Studies (University of Notre Dame, US) in the academic year 2014-2015. In 2018 – GMF’s Marshall Memorial Fellow. From 2010 and 2018 she worked in the Polish National Security Bureau’s Strategic Analysis Department, focusing on the former Soviet Union, NATO-Russia relations, international peace and security organizations, and arms control. She also served as Program Development Adviser in the Peace and Stabilization Program in the Casimir Pulaski Foundation and worked as a journalist in one of the Polish newspapers. In 2015 she conducted her field research and cooperated with human rights organizations in Israel/Palestine. Her areas of interest include: peace and conflict studies, nonviolent resistance, conflict analysis, American and Russian foreign policies, former Soviet Union, and critical thinking.

Catherine White is a gender expert and gender advisor for the United Nations Institute for Training and Research (UNITAR). She holds extensive experience of working on gender equality and gender mainstreaming and is responsible for developing and implementing a gender perspective and gender equality programming across all projects and activities of UNITAR's Division for Peace.

Marcin Bużański is a political scientist, General Manager of the global knowledge network “Expertise on Demand”, Director for International Dialogue of the Warsaw Security Forum, with a career with the United Nations in areas of political transitions, conflict analysis, supporting peace processes and mediation and post conflict governance. Specialized in: planning and implementation of policy and programmes for post-conflict state-building; UN peace operations; supporting peace negotiations and mediations, democratization and humanitarian aid. Former employee of UNDP and UNICEF, recently as coordinator of the UNDP inclusive political process support in Somalia, and working with political institutions in Afghanistan and Iraq. Previously employed at the UN Headquarters in New York and Geneva, responsible for supporting UNDP’s work on post-conflict governance, primarily in Africa and Middle East Regions, including response planning after the so-called ‘Arab Spring’. Advised also the UN in Sudan (Darfur), South Sudan, Liberia and concerning projects in Central Asia. Graduated from the School of International and Public Affairs at Columbia University in New York as well as from the Institute for International Affairs and the Centre for Europe – both Departments of the University of Warsaw.

Register through this link